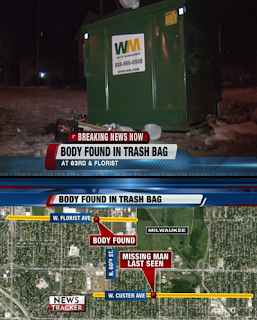 The badly decomposed mutilated body discovered last night had been covered in a white sheet was less than a mile and a half from where Evon Young LT was murdered. The police have yet to identify the body. I will update when they make a identification.

Although five people have been charged with Young's murder his body has not been recovered. The police gave up trying to finding him in the Menominee landfill last week.

*Update Feb 20: The lawyers of the five who are charged with murderering Evon were in court for a hearing the 19th .

WTMJ has more on this story.
Posted by planetransgender at 10:07 AM No comments: