This sushi "Gin No Sara" commercial suggests that a trans woman's romantic interest was about to be fooled since he didn't "Know the materials". Its viral subliminal transphobic message is deeply appealing to the targeted audience.

You can't spoof a cowards excuse he might try to use when charged with murdering a transgender woman. It's about as funny as a rape joke.
Posted by planetransgender at 9:29 PM No comments: Links to this post

Email ThisBlogThis!Share to TwitterShare to FacebookShare to Pinterest
Labels: Gin No Sara

"Trapped in the Wrong Body: Growing Up Transgender"

"What do you do when your child feels like they were born in the wrong body? On this episode of Katie, you’ll hear the deeply personal stories of three transgender children and their parents, and their journeys to understand the psychological, physical, and social process to become their authentic selves.

Meet Coy Mathis, a transgender girl who at only six-years-old is fighting alongside her parents for the right to be fully recognized as a girl in school. Katie will explore how medical advances are being used earlier and more safely to change the biological process of puberty, and she will introduce a beautiful woman who struggled for her father’s acceptance and has an important message about gender identity."

Click here to find a station that carries Katie near you.

Posted by planetransgender at 7:47 PM No comments: Links to this post 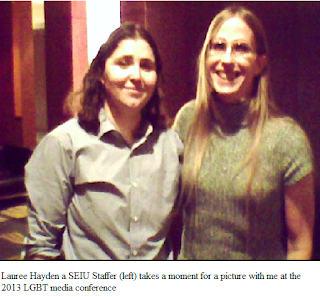 First thing Lauree did was to ask to see a show off hands of how many of us had ever been union. Approximately 30 of the 60 or so in attendance raised theirs hands including me. Lauree then asked how many of us currently belonged to a union and all but a smattering including myself lowered our hands.

I was fired from my first job after beginning transition at Walmart after "Our Walmart" organizers entered the store a month earlier. Seemingly a non issue at the time to me I told the store manager, in a meeting he asked for, that I once belonged to the Teamsters and the United Food and Commercial Workers Union. I wasn't concerned partly out of a misplaced sense of loyalty to the store that had hired me when no one else would and after all hadn't I had just received my third year review indicating I was doing a good job?

I should have been worried.

I was fired a few months later after they continually demanded that I do a job they were fully aware was beyond me physically to do. That was just a cover as they ended up quickly firing most of the other employees who were present or even employed at the times the organizers had entered the building.

I like untold thousands of Walmart employees were fired because we  once had been or were suspected of having union affiliation even if it was years in the past. The rich are that scared of us organizing and demanding a fair share.

The truth is as the rich continue to profit at our expense at ever increasing percentage while we continue to make less in respect to what we made twenty years ago. Union breaking is and continues to be a leading tool of the one percent as evidenced by the lack of Union members present at our LGBTQI media conference.

Truly union, Cis-labor, and transgender people are meeting at the intersection of poverty, homelessness and despair. The LGBT media has a obligation to publish the map that will help guide our way back.
Posted by planetransgender at 9:44 AM No comments: Links to this post