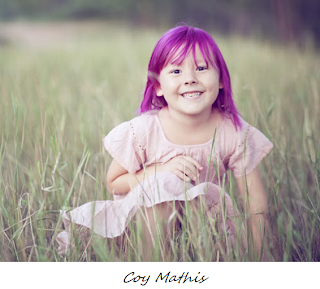 Coy was labeled male at birth, but has always known that she is a girl, and has expressed this since she was 18 months old. Since kindergarten, Coy has worn girls' clothing to school. Her classmates and teachers have used female pronouns to refer to her and she has used the girls' bathrooms, just like any other girl in her school.

The Colorado Anti-Discrimination Act prohibits discrimination against transgender students in public schools. Despite efforts to get the District to reconsider its decision, it has refused to do so. Coy's parents have removed her from school and are home schooling her until this Complaint is resolved.

"We want Coy to have the same educational opportunities as every other Colorado student," said Kathryn Mathis, Coy's mother. "Her school should not be singling her out for mistreatment just because she is transgender."

"By forcing Coy to use a different bathroom than all the other girls, Coy's school is targeting her for stigma, bullying and harassment," said Michael Silverman, TLDEF's executive director, and one of Coy's lawyers. "Through the Colorado Anti-Discrimination Act, Coloradans have made it clear that they want all Colorado children to have a fair and equal chance in school," he added. "Coy's school has the opportunity to turn this around and teach Coy's classmates a valuable lesson about friendship, respect and basic fairness."

"We have five children and we love them all very much," said Mrs. Mathis. "We want Coy to return to school to be with her teachers, her friends, and her siblings, but we are afraid to send her back until we know that the school is going to treat her fairly. She is still just six years old, and we do not want one of our daughter's earliest experiences to be our community telling her she's not good enough."

(2) "It is a discriminatory practice and unlawful for a person, directly or indirectly, to refuse, withhold from, or deny to an individual or a group, because of disability, race, creed, color, sex, sexual orientation, marital status, national origin, or ancestry, the full and equal enjoyment of the goods, services, facilities, privileges, advantages, or accommodations of a place of public accommodation...."

Posted by planetransgender at 10:41 PM No comments: 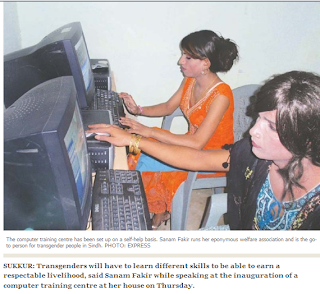 Apropo of the social change in Pakistan where democracy has previously has been just out of reach Sanam Fakir, a transgender woman is running for office.

"It is not our destiny to merely dance for others and hold begging bowls. We have a life to live," Sanam Fakir, 32, told AFP by telephone from the town of Sukkur, about 800 kilometres (500 miles) southwest of Islamabad.

The elections will be for the national parliament and provincial assemblies.

Running as an independent in Sukkur, which is traditionally dominated by the main ruling Pakistan People's Party and which has a tiny transgender community, Fakir's chances are slim of winning a seat in the Sindh provincial assembly.

This is not the first time Sanam Fakir has made strives to raise our community up in Pakistan where discrimination is so extreme. Previously she bought three old computers and runs a learning center for our family in her house.

Sanam Fakir is truly a inspiration and remarkable leader of the transgender community to emulate. Regardless of the outcome of the election  Sanam Fakir is already a winner.

Posted by planetransgender at 9:33 AM No comments: