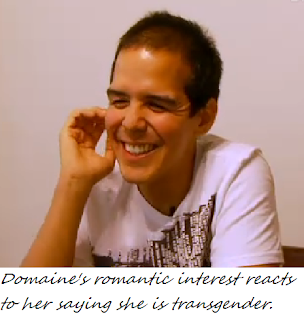 The producers of "True Life" began this episode in Jerry Springer fashion featuring trans woman Domain Javier saying the show would introduce you to people who lived..."Every minute of every day lying about who they are...trapped in a web of deceit as they try to hide there true identities..." essentially amplifying and validating every misconception and lie we as a community fight against every day.

My first impulse watching the video below was to go against the tide and say, OK you said you are a fraud, what do you want me to do, stand up for you now than you are suing the California Baptist University'?

I mean Domaine's blessed with enviable beauty and is using her charms to fool men, a set up for a transpanic murder if ever there was.

Domaine explains why she couldn't ever have a relationship with a man because ..."I couldn't tell them I was really a guy"...

At that moment I was really kind of disgusted with her self hate and doubt but she's young, passionate and searching for herself so I watched more of the episode getting more and more engrossed...

Domaine then says that she has always felt like a woman which is all she needs to say for the trans community and myself to defend her..but lets look at this in context to her being expelled for fraud by a Baptist University. It's illegal within California to discriminate on the basis of transgender status and there are no religious exemptions as long as the school receives public money which The California Baptist University does.

So will Domaine begin to live proudly and authentically with us on our bittersweet road less traveled? Or will she continue to deceive? Watch and see.

Get More:
True Life, Full Episodes
Posted by planetransgender at 9:56 AM 5 comments: