Your Trans Voice Got You Locked Down? Get Your Key and Break Free!

Long ago decided my voice was not going to inhibit my transition after coming to the conclusion it was not going to reflect my gender no matter what I did. It was a hard thing to come to terms with as my gender presentation at the time was, lets just say rough, undefined and unrefined. Sounding like a man just did not help.


Even with today's more inclusive social atmosphere vocal presentation remains an obstacle for many, particularly male to female trans people. For instance, I have a friend who has told me the major issue that is keeping her from fully transitioning is her voice. To me she sounds and looks enviable but it is our own self perception that holds us back after all.

There may be help for the vocally insecure as there are people who are studying this issue. Given time and effort who knows what might be possible? Yesterday I was contacted by Stefanie Hays, a graduate student at Louisiana State University who's conducting a study which could lead to drastic improvements in our lives.

She explained "I’m doing a research project about attitudes and perceptions about voice among people who identify as trans. The speech/voice field has done some previous research about trans voice, but hasn’t traditionally (received) a lot of input from the trans community itself. I’m hoping to start addressing that problem through a research project, using an online survey."

I just finished the ten minute survey. She has included all of her contact information including the supervising professors phone number. Of course you are free to opt out at any point during the survey.

Posted by planetransgender at 10:13 AM 2 comments: The news from Turkey nearly always heartbreaking, is instead today, groundbreaking.

Just released a movie made in Turkey about LGBT youth and the incredible hardships they face. But who would make such a thing in this land where we read about the horrific murders of trans people many regulated to sex work and honor killings , the tragic slaughter of sons and daughters by family compelled by a false sense of shame and guilt?

The answer is Turkey's bravest  LISTAG (Families of LGBTs in İstanbul)! These souls, who I am so honored to write about today, are the ones featured in this documentary titled My Child. 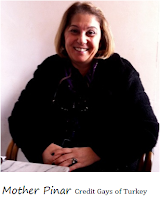 Meet Mother Pinar, a founding member of Listag and the mother to a transgender child who "was raised in a traditional family with “honorable woman”, “not to come home after it’s dark” kind of myths and of course with sins, taboos and disgraces like many of woman in her generation."

So how was it that Mother Pinar found herself with her daughter on our road less traveled? Read about this incredible woman in Gays of Turkey.

Visit the offical My Child website and learn how you can bring this documentry to your family.


Posted by planetransgender at 8:17 AM No comments:

Domique Fennel, Wayne Green, Kalif Halie, Jorge Castro are wanted in connection with the Rape and beating of a midtown transgender woman Febuary 28th 2013 according to NY1.

"The attack occurred about 2:15 a.m. in a hotel on 57th Street, in the Midtown North Precinct, according to the NYPD."

Anyone with information about the incident is asked to call the NYPD Crime Stoppers hotline at 800-577-TIPS. Members of the public can also submit tips by logging onto the Crime Stoppers website at Crime Stoper.com, or by texting tips to CRIMES (274637), then entering TIP577

Posted by planetransgender at 5:57 AM No comments: