This is too awesome! Everyone who contacted the restaurant about this have the good people at Lonesomes Pizza to thank for listening to our concerns. After reading about "tranny breadsticks" on Reddit and how upset some peeps were about this I decided to call them too. I talked with a really cool manager, John, who said he'd talk to everyone about our concerns. A screen grab from the original post Portland Oregon's Lonesome Pizza "Tranny Bread Sticks".

Noah, a owner at Lonesome's pizza posted this comment to the original srticle:

oye... been going back and forth on this one all morning... -ultimately, we've decided to change the menu name. the absolute last thing we ever want to do is upset somebody who's already got a rough road. the idea of doing that makes us all feel pretty horrible. so, if you're transgender, we're all apologies. christ, both me and nik (I'm 7 ft tall and he's 3 foot 6) have been listening to shit our whole lives, and to think that we're heaping it on to somebody who deals with exponentially more shit on a daily basis makes us both feel like dicks... so, again, long story short, we'll come up with some other sophomoric, hopefully inoffensive name (anybody with an idea for a breadstick name is more then invited to throw something out).

-but I've got to say one other thing here, I know this isn't going to be awesome for pizza sales, ...but we don't sell any pizza anyway, so what the hell... the ONLY thing that caused us to hesitate about changing the menu name is the notion that we might be placating a particular group of Portlanders who we so very, very much dislike... -there is in our little town a small, but loud minority of folks who are in a constant search for platforms for there own sanctimony. just douchebags who like the sound of there own pretentious voices. on behalf of everyone at our pizza place, we'd like you to know that you suck. order from Dominoes or somebody. seriously. you suck. -that being said, if you're an outlier, if you're anywhere near feeling like your on the margins, we really want your business, you're why we dig (and identify with) this town. you're the best thing about it. again, we really are sorry to all the transgender folks. we're dumb, no question, but we're learning.
-the dudes from Lonesome's Pizza.

And true to his word Lonesome Pizza's new web page and menu:

Thank you dear people at Lonesome's Pizza. You definitely rock:)

Lonesomes Pizza's looking for suggestions so they can name their breadsticks. You can call get a pizza and suggest a new name at 503-234-0114.

Posted by planetransgender at 11:02 PM No comments: Links to this post 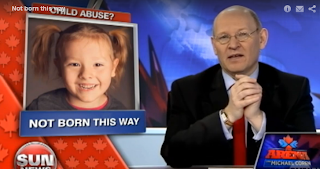 Sun Tv host Michael Coren knows his screed attacking 6 year old Coy Mathis would invoke a response from reasonable intelligent people. I almost feel like I'm playing into his hand by acknowledging his existence. Almost. There must be a rebuttal to ignorance even if its as pathetically transparent as this is.

As a friend of the Mathis family I am ill after watching this video. How could anyone say these awful things about such a loving family and dear daughter?

Coy is a girl. She knew she was a girl as did I in my earliest recollections. The real harm will come one day because Coy will watch this video and if she had any doubts that some people are ignorant assholes, she won't after watching this video. Want to know how people are responding to the screed? There's a well written article and a discussion over at Pink News.
Posted by planetransgender at 9:57 PM No comments: Links to this post