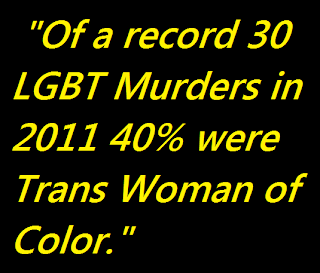 Three transgender woman of color have been murdered in April alone. "Enough is enough" says Sharon Lettman-Hicks, Executive Director and CEO of the National Black Justice Coalition (NBJC) in a joint press release with The National Coalition of Anti-Violence Programs:

The National Coalition of Anti-Violence Programs (NCAVP) is deeply concerned of three unsolved homicides of transgender women of color that occurred during the month of April in 2013, which continues a trend of murders of transgender and gender non-conforming women and people of color in the past few years. On Wednesday, April 3rd, Kelly Young, a 29-year-old black transgender woman, was found shot to death inside a home in Baltimore, Maryland. Then on Thursday, April 4th, 30-year-old Ashley Sinclair, a black transgender woman, was found shot to death in a wooded area in the Oak Ridge section of Orange County, Florida. And on April 30, another young black transgender woman, Cemia Dove, also known as Ci Ci was found on April 17 in a retention pond in Olmsted Township, Ohio. Dove, a 20-year-old woman, had multiple stab wounds, was tied to a concrete block, and was found naked from the waist down. As of April 30th, all three of these homicides remain unsolved.

At issue is also the media's horrific reporting of Ce ce Dove in Ohio and there dismissive attitude to local LGBT groups concerns:


The Buckeye Region Anti-Violence Organization (BRAVO), an NCAVP member organization that works to end LGBTQ-related violence and homicide, has issued a press release about Dove’s murder, but media failed to pick up the story. “BRAVO is saddened to learn of the most recent hate crime murder, and outraged at the media’s flagrant disregard for human dignity,” said Gloria McCauley, Executive Director of BRAVO, “Every homicide deserves to be investigated and all possible leads followed so that we can understand what the cause of the homicide was. This is particularly true when the homicide involves a community that we know is at a higher risk of bias-related homicides such as transgender women of color.”

Three unsolved homicides within one month should elicit a national outcry," said Sharon Lettman-Hicks, Executive Director and CEO at NBJC. "We need to hold our law enforcement officials accountable at every level--from local police departments that need to work tirelessly to find these killers and bring them to justice, to federal agencies such as the Department of Justice that should create a national task force to address the serial killings of Black trans women in this nation. How many more lives must be lost before we take serious action to stop this madness?"

Posted by planetransgender at 9:27 PM No comments: 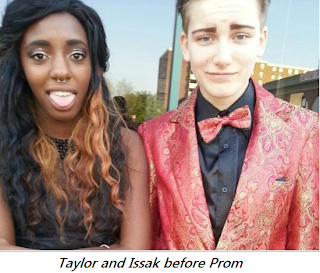 The world first became aware of Issak Oliver Wolfe, a transgender senior attending Red Lion Area High School when his bid for prom king was unceremoniously changed to prom queen by the school's principal Mr. Shue. There wasn't much Issak could do about that because it was done without his knowledge at the last moment. He didn't learn of the change until he went to cast his ballot!

But it was just the beginning of Issak's battle for respect. The ACLU became involved at that time demanding that Issak be allowed to attend the prom in his authentic gender as a male with his supportive girl friend Taylor. Mr. Shue relented and allowed them to attend but there is one more critical unresolved issue.

Mr. Shue has said Issak's legal name will be read at graduation. Issak is in the process of changing his name now that he is 18, but that won't be completed until after graduation.

The PA code Title 22 Education does not require schools to read a students legal name at graduation and nether does the Red Lion School District.

Read Issack's authentic name. Soon after graduation it will become his for the rest of his life. It's just a simple request. Respect not bigotry.

From the ACLU May 6th press release

On April 25, the American Civil Liberties Union and the ACLU of Pennsylvania sent a letter on behalf of Wolfe, asking among other things, that the school allow Wolfe to attend graduation wearing a black cap and gown for boys, as opposed to the yellow cap and gown mandated for girls, and have his male name read at the ceremony. The letter also asked that the school adopt a policy to allow students to run for prom court in accordance with their gender identity, as well as a broader nondiscrimination policy protecting transgender students in the district. In his response, the school district's solicitor agreed to allow Issak to wear a black cap and gown but denied the rest of his requests.

"I am really disappointed that the school district doesn't want to do anything to protect transgender students," said Wolfe, a senior at Red Lion Area High School. "I want to make sure that future transgender students are not humiliated and disrespected the way I was."

Wolfe plans to take his case to the RLASD school board at their next meeting on Thursday, May 16

You can keep up to date with Issak and his wonderful girlfriend Taylor by liking their facebook page and signing The ACLU petition "Issak's Simple Message: Respect, Not Bigotry".


Posted by planetransgender at 2:45 AM No comments: