Peruvian nightclub Gotica Discoteca fined $123,302 and shutdown for discriminating against a transgender woman 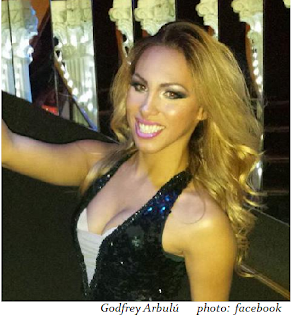 Peru nightclub Gotica Discoteca was fined S/370,000 for denying Godfrey Arbulú entrance and later trying to charge her a higher cover than normal. All of this was caught on video and audio which Ms Arbulú successfully used in social media, radio talk shows and Television in a bid to get the government to protect her human rights. 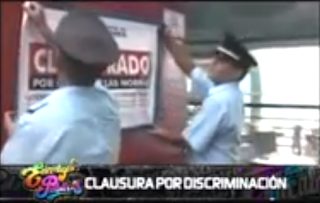 Gotica Discoteca is contesting the ruling has this sign posted above its shuttered doors stating “Gotica Entertainment S.A. informs the public that all discriminatory practices to consumers for any reason, including unjustified distinctions by origin, race, sex, language, religion, opinion, economic status, sexual preference or any other reason are prohibited.”

Read more at Peru this week.com
Posted by planetransgender at 10:51 PM No comments: Links to this post

AP: Urging critics of Russia's new anti-gay law to "calm down," the country's sports minister said Thursday that the rights of all athletes competing at next year's Winter Olympics in Sochi will be respected. 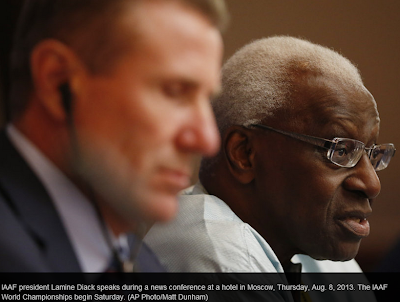 Sports Minister Vitaly Mutko did insist that athletes would "have to respect the laws of the country" during the Feb. 7-23 games in the Black Sea resort in southern Russia.

Mutko said the issue had been blown out of proportion by a groundswell of protest and unease outside Russia. 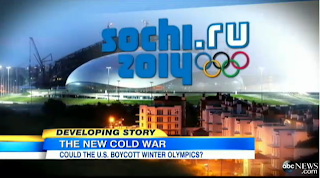 Essentially, anyone willing to forgo common human dignity supported by the vast majority of the world are welcome. All others, gays, Lesbians, Transsexuals, Bisexuals, Gender Queer, Intersex, followers of religions other than the Orthodox church, atheists, anyone not belonging to the United Russia political party and migrant workers, shut up, calm down and maybe you won't get you head caved in.

Obama cancelled a summit with Putin in part because of Russia's anti LGBT laws making Obama the first world leader not 'calming down'.

Recently the new civil rights movement wrote about the quandry the IOC faces regarding the human rights records of host countries.

IAAF president is calmed down.

"I don't have the feeling there is a problem whatsoever," IAAF President Lamine Diack said. "There is a law that exists. The law has to be respected. Some things have to be respected. We are here for the world championships."

Pussy Riot in prison for singing a protest song in a Orthodox church and they aren't calmed down. Nether am I. I am outraged and pissed off that any country should treat its minorities so horriably THEN have the adacity to tell those of us outside of its sphere of influance to JUST CALM DOWN.

Want to know what would start calming me down Mr. Mutko? If you freed Pussy Riot and recinded the 'gay propaganda laws and stopped encouraging to beat up my people. Then I would start to calm down,

Untill That happens we will have a Pussy Riot.


International Olympic Committee Charter
Posted by planetransgender at 9:06 PM No comments: Links to this post