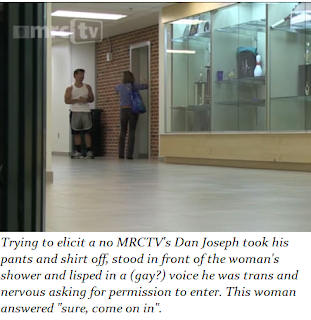 No matter how hard hate mongers MRCTV's Dan Joseph tried to frame his questions with a biased slant the college students replied with thoughtfulness and personal insight.

One thing that Dan's video makes clear is College students even in the most red of red states like Virgina are aware and concerned about the well being of their fellow students, transgender included.

Trying to elicit outrage  MRCTV's Dan Joseph took his pants and shirt off, stood in front of the woman's shower and lisped he was trans and nervous asking for permission to enter. This woman answered "sure, come on in". She probably knew you were some kind of idiot or a poser Joseph. DUDE! Whats up with taking you're clothes off and the lisp? Stupid really, stupid even funny, but in a pathetic sort of  way.

If I was that woman at the locker room door and a half dressed man tried to pressure me into allowing him into the shower area I might have filled out the Mason Bias Incident Report Form or maybe call the campus police.

The college students are in sharp contrast to the bunch of parochial bigots who validate comments deriding the California transgender bill, like Ken's with juvenile references to the "Porky's scene when male students peeked into the girls shower.


"...what the Media Research Center might not have noted while it was posting its triumphant expose is that all the man-on-the-street interviews they did about how grotesque and world-ending it was for Jerry Brown to be all “okay Cali students, use the bathroom that matches your gender identity, no big” were, um, full of nuance and thoughtfulness! Did they even notice that? They didn’t right? Basically every single person is like “yeah, no, we don’t actually see a problem with it,” and the few who do say that there could be hypothetical issues, or that it might be “problematic,” are doing so from a space of, like, yeah, some people could be uncomfortable we guess, and there could hypothetically be teenage Dans out there trying to see some beav, but even then nobody’s even the littlest bit upset about it. It could be complicated! That is not a crime against transgendered humanity to think so!
The only crime against humanity is Dan Joseph’s face. :( "

Posted by planetransgender at 8:41 AM No comments: