Dantjier Powell, your Dad needs you to turn yourself in. Please. 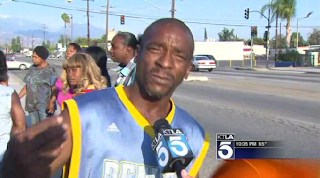 Loueadry Powell makes a heart wrenching plea for his son to come home and turn himself in.
Dantjier Powell disappeared after transgender woman Domonique Newburn was found murdered.
Dantjier if you read this, please turn yourself in before law enforcement is forced to act.

You loved Domonique, there is no shame in that.
More at KTLA

Posted by planetransgender at 3:11 PM No comments: Links to this post

DR Judy Meissner comment on planetransgender caused me to detransition? 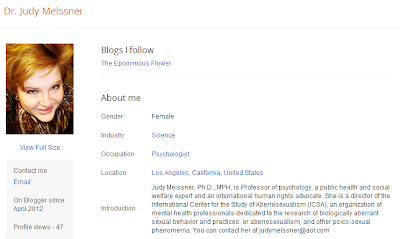 Basically she said  I was insane to falsely, freely disregard and openly misrepresent my biological sex.

Meissner's blogger profile  (click to enlarge) identifies her as therapist from Los Angeles and a director of the of the "International Center for the Study of Aberrosexualism (ICSA), an organization of mental health professionals dedicated to the research of biologically aberrant sexual behavior and practices, or aberrosexualism, and other psico-sexual phenomema."

Dr. Meissner's words were heart breaking! To know that a California certified therapist would tell me in essentially I was insane broke my spirit. How could I believe that I am transgender and not suffering from narcissistic psychotic self delusion after reading her comment?

I mean after all she's not just a California (Licensed presumably) therapist but a Master of Public Health (MPH) as well!

Who could argue with those credentials. Wanting to find some way to express my appreciation I decided to learn about Dr. Meissner first, so I googled her.

All I got in return was a litany of like comments by her deriding marriage equality, gay rights conflating constitutional rights with theocacy and deriding transsexualism.

OK, I so tried to find the web address for her 'estemed' group "International Center for the Study of Aberrosexualism (ICSA), but google, even DOG PILE came back with nothing even remotely resembling credentials or authenticity. Not even a web address. Nothing.

DID I BECOME A MAN AGAIN BECAUSE OF A WACK JOB?

Well no, I didn't detransition because
a) I am a woman and
b)  just a tad to cynical.

so here are the rest of my search results.

I couldn't find ether Dr. Judy Meissner or her group on LinkedIN, White pages, Yellow Pages and Guidestar does not list the "International Center for the Study of Aberrosexualism (ICSA)"

I'm not saying she hasn't earned degrees, there are few resources to check on that.

What I am saying isthat  her opinions as a 'doctor' of psychotherapy are without empirical truth and are diametrically opposed to WAPTH and The American Psychiatric Association regarding transsexualism and homosexuality. In fact she sounds more like a TERF and they ARE certified transphobic WACK JOBS suffering from schizophrenia delusional disorder.

So here, for you're viewing pleasure is the comment made by Dr. Judy Meissner on the post "Counter the Christian Family Coalition's Miami Dade Anti Trans Hate Tactics:

Dr. Judy Meissner said...
WAKE UP AND SMELL THE COFFEE! Objectively speaking, a human being’s sex, age, color, race, and ethnicity, or biological ancestry, among many other personal traits, are not up to them to arbitrarily decide; they are not based on a personal opinion, private fantasy or subjective perception. Sex is a precisely determinable genetic fact. It is a scientifically demonstrable biological reality. As such, like it or not, sex can never be altered or changed. While an individual's physical appearance can be cosmetically changed or modified, or they can change their personal opinion as to their sex; their DNA, or chromosomes, can never be altered. Gender Identity” and “Gender Expression” are non-scientific, ideological terms, i.e., terms specifically concocted to advance an ideology. Neither term is scientifically demonstrable, genetically verifiable, nor an objectively definable biological reality. Both terms are difficult if not impossible to scientifically interpret and define. It is contrary to sound public policy to recognize or grant an individual the false “right” to freely disregard and openly misrepresent their biological sex because this will thereafter recognize and grant the false “right” of individuals to disregard and misrepresent their age, race, ethnicity, or any other biological realities. SAVE Dade: You need to understand that there is no constitutional or rational right to demand that society accept my sexual fantasies, my personal opinions or my subjective ‘feelings’ about whether I’m a man or a woman! This ordinance has absolutely nothing to do with civil rights. It is simply an excuse to unjustly discriminate. You’re not advocating equality, your pushing insanity! Deal with it, sisters. You need to turn the page!
August 24, 2013 at 10:53 PM

So...the next time you see a comment by this person you'll know who you are dealing with.

Have a nice day Judy.


Posted by planetransgender at 2:19 PM No comments: Links to this post