District Judge: If Inmate Ophelia De’Lonta is transgender she is entitled to state funded SRS 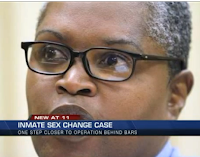 Virginia transgender inmate Ophelia De’Lonta is a 'step closer'  to getting the medical treatment prescribed by the APA. A district Judge has ruled that Ms De’Lonta has the right to be diagnosed by a therapist of her choice and if the prognosis indicates she is transgender she has the right to get state funded gender confirmation surgery.

The APA  definition of transsexualism  published August 19th 2013 in their Healthy Minds blog:


"A transgender individual is someone with the desire to live and be accepted as a member of the opposite sex. This can be accompanied by the wish to make his or her body as congruent as possible with the preferred sex. A transsexual individual is someone who has taken measures, through surgery or hormone therapy, to achieve their desire of living and being accepted as a member of the opposite sex. In general, transgender individuals prefer to be addressed using pronouns and other culture norms that are congruent with their preferred gender identity.