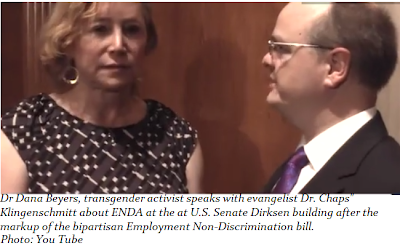 The embedded video by "Dr. Chaps" Klingenschmitt a retired Air Force chaplain, is framed by him as a debate although Dr. Klingenschmitt doesn't debate.
He only asks leading questions about  ENDA'a mark up which much to the credit of Dr. Beyers, were answered truthfully with tact and grace.

I was aghast as Klingenschmitt maliciously insulted Dr. Beyers in every way he could on the video and accompanying article Co-Ed Bathrooms? Chaplain Debates Transgender on ENDA Bill, yet Klingenschmit seemed so respectful while interviewing Dr. Beyers.

Calls to Dr Klingenschmitt media contact number have not been returned at this time.
* Update Dr. Klingenschmitt has left a voice mail which I intend on answering.

I was successful in contacting Dr. Bower for a statement regarding this interview. She offered this:

I will say: “I think it’s time that we in the trans community learn from our gay allies, who leap from success to success, and come out fully so that America can get to know us. Coming out is the critical act, and that includes speaking with those who are most opposed to our rights, be it from personal bias or just plain ignorance. I have been speaking with religious fundamentalists for years, having grown up in an orthodox Jewish environment, and have actually made inroads. Too often, though, some let their prejudices overwhelm them and they hoist themselves on their own petard. I had no expectations of the interviewer, and we treated each other civilly during the process.

I asked Dr. Beyers if she had any inkling of Klingenschmitt Malintent.

"Apparently he just couldn’t help himself. It’s his loss, but I remain hopeful that some in his community will see how limiting close-mindedness and incivility can be.”


ENDA as marked up exempts religious employers so Klingenschmitt's arguments against ENDA are not founded on legislative fact.

Dr, Klingenschmitt's arguments against ENDA are not based on Biblical truths ether. This was clearly intended as a act of violence by Klingenschmitt to willfully hurt Dr. Beyers.

It is a sin when a man, who proclaims to speak for the lord invokes hate maliciously against fellow humans especially when then the bible tells him to do otherwise.

It is a sin because biblical passages by God, Jesus and the Holy Spirit make it clear transgender people are welcome in the kingdom.

I posted this comment  to Dr. Chaps You tube but it was not approved at post time.
*Update Dr. Klingenschmitt has informed me he has published my comment..

Isaiah 56: "Do not let the foreigner joined to the LORD say, ‘The LORD will surely separate me from his people’; and do not let the eunuch say, ‘I am just a dry tree.’ For thus says the LORD: To the eunuchs who keep my Sabbaths . . . I will give, in my house and within my walls, a monument and a name better than sons and daughters.

Mathew 19:11 and 12 Jesus asks his disciples to accept transgender people.
Acts 8:26-40 Philip and the Ethiopian Eunuch


Posted by planetransgender at 10:32 AM 4 comments: Links to this post