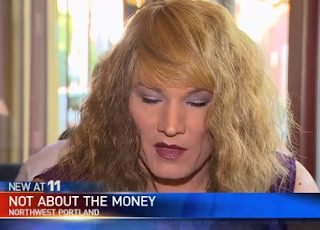 Almost exactly one year ago I reported on a group transgender woman   in Portland Oregon who were thrown out of a local bar, the P Club. The owner of the club left a voice mail on one of the woman phones telling her and her friends not to come back because he didn't want people to think he was running a 'tranny' bar.

Well, that man is out $405,000 dollars.  Oregon's Equality Act makes it illegal to discriminate against transgender people in public accommodations.

It's not about the money.

Susan Miller posted this to her blog August 31st giving us an idea why.


"It has been a long 14 months and although we won it is not over as we are sure and actually looking forward to Chris Penner the bar owner appealing this ruling. This was an administrative Judge ruling which is good but an appeals Judge ruling or even the state Supreme Court ruling would be better."


Posted by planetransgender at 6:37 AM 2 comments: