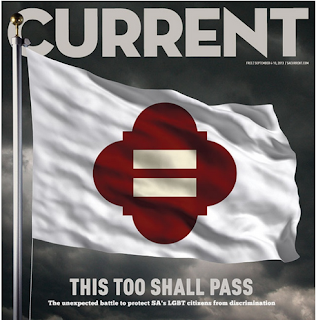 The San Antonio City Council has just passed a municipal Nondiscrimination Ordinance that prohibits discrimination based upon sexual orientation, gender identity, and veteran status in employment, housing and public accommodations.

The ordinance passed on a vote of 8-3, with Council Members Elisa Chan, Carlton Soules, and Ivy Taylor voting against the measure.
The ordinance is an update of existing city code, and for the first time adds sexual orientation, gender identity, and veteran status as protected classes.

Lauryn Farris, who is on the Alamo Area Board of Directors for the Transgender Education Network of Texas (TENT) and a member of the San Antonio Gender Association (Saga) said this about what she called a "fully inclusive ordinance":


I am blessed to be able to be here and work with the most awesome LGBT community anywhere. To an individual or organization when we agreed that we were all in it together they never wavered.

Send a letter of thanks via Equality Texas to Mayor Castro and our fair minded council members.

Councilwoman Elisa Chan! Calling for integrity and transparency! Are you serious Chan? I guess you have no where to go but further down your hole since your lies and derailing were exposed in that secret recording. You have no shame.

Posted by planetransgender at 8:01 PM No comments: Links to this post

Have you faced heath care discrimination? HHS is accepting comments on health reform

Posted by planetransgender at 7:22 PM No comments: Links to this post