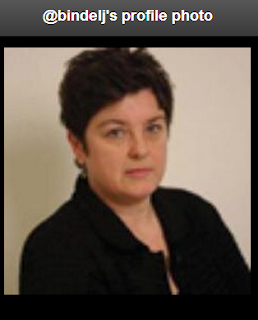 
"The opposition is thought to stem from an article on transgender issues that Bindel wrote for The Guardian in 2004, in which she described gender reassignment clinics as places where lesbians can go to ‘have their breasts sliced off and a penis made out of their beer bellies".

Further controversial comments included the apparently dismissive conclusion, "I don’t have a problem with men disposing of their genitals, but it does not make them women, in the same way that shoving a big of vacuum hose down your 501s does not make you a man".

It's unknown what if any protests were made to Bindel's approaching appearance by trans peoples and our allies or whether there was in fact any protests planned in the event she appeared like the ones in 2008 here and here. However Independent, repeating a byline does not make it the fact.

The Independent reports on death threats made against Julie Bindel in relation to her writing on trans issues: http://t.co/N8m1sRluWJ
— Trans Media Watch (@TransMediaWatch) September 17, 2013

I want to reiterate my strong condemnation of violence or the threats of violence. If it were in fact a trans person who made those purported threats against Bindle I would advocate for justice, but with that being said, its a all to common practice of TERF's to put themselves in a position where they can claim rape and other threats were made against them, usually by trans people.

Bindel's ltweet on this qualifies may last statement all too well

What a coincidence that as soon as the (tiny minority) of trans activists start on me again the pro-porn and pimp lobby do at the same time!
— Julie Bindel (@bindelj) September 17, 2013

Re last tweet, I mean a 'tiny minority' of the trans community, rather than of the whole
— Julie Bindel (@bindelj) September 17, 2013

Which to some extent is true. There is a contingent within our community who are, like myself, rather militant in response to TERF rhetoric but for good reason. TERF's like Bindel have honed there skills in provoking angry responses, obfuscating truths and derailing conversations to a fine art. And just like this instance, in hopes of placing themselves in the victim role.

And for the record it's not a tiny minority Bindel. The overwhelming majority of trans people respond to TERF transphobia in one way or another be it cerebral or militant in nature. That may seem like a ineffectual response to you since we are in truth a 'tiny' minority but even more ineffectual is your worn out dog eared victim card.

And isn't sad that we agree on so many feminist issues like the one you could have spoken up about?


Posted by planetransgender at 10:14 PM No comments:

Seamus Johnston sues Pittsburgh University after being expelled for being transgender 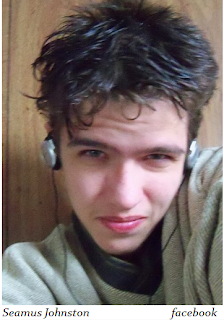 From being declared Persona Non Grata, citations for lewd behaviour for using the men's locker room, mandated on campus reparative therapy, forced surgical body modifications and being falsely indicated by UPITT in bomb threats resulting in a grand jury investigation, transman Seamus Johnston has every right to seek justice.

Former UPitt honor student Seamus Johnston has filled a lawsuit (embedded below) claiming the school arrested and subsequently expelled him on the basis of gender expression resulting in the deprivation of his rights guaranteed by the fourteenth amendment.

Seamus (pronounced Shame-us) was participating in a campus for credit weight training class and had used the men's locker room during October and November uneventfully. But after the student news paper published a article titled "Transgender student claims discrimination" that the school served him with the first of many citations for disorderly conduct.

That was just the beginning of the retaliation Seamus would endure.

Mr. Johnston was disciplined in the form of expulsion following two times where he was observed using men's restrooms. He was expelled ostensibly because he used men's facilities while having a female sex designation on his student records even though his drivers license indicated he was male. He would not have been subject to discipline if UPJ had not refused to correct the sex designation on his student records. 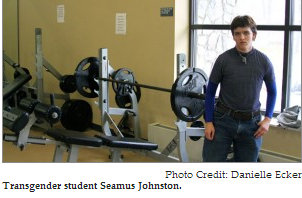 On May 30, 2013, after multiple attempts over 16 months to get the charges dismissed or withdrawn for lack of probable cause, Mr. Johnston plead guilty to the reduced charges of Trespass and Disorderly Conduct .

On January 20, 2012, Mr. Johnston presented his story of discrimination at a meeting of the University Senate Anti-Discriminatory Policies Committee (“ADPC”) in Pittsburgh.

On February 21, 2012, the ADPC unanimously passed a resolution recommending that the University nondiscrimination policy should operate according to the sex with which the person identifies now, not their natal sex, noting that birth-certificate verification might be in violation of the University's Non-Discrimination Policy and city ordinances,and that this should apply to all regional campuses.

Shortly afterwards an anonymous representative from UPITT administration informed the ADPC and others for the first time that the school would only accept a birth certificate or court order as proof of gender.

All of this litigation takes courage and money so Seamus has started a crowd source funding campaign.

Posted by planetransgender at 2:40 PM No comments: