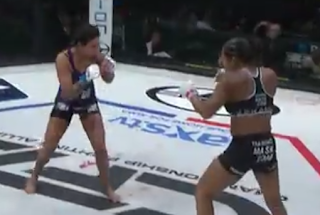 Evans-Smith came out and stunned Fallon Fox right from the beginning with a bad ass take down. I don't think Fallon Fox was prepared for this one.

Trigger warning. If you read any of the comments on the UFC or the MMA they are full of despicable transphobic asshats belittling womankind as a whole.

One person said that Fox was a two time loser. Once for cutting her 'junk' off and the second for being beaten by a girl. Yeah. That Misogynistic transphobic moron got a chance to voice his hate of womankind at the expense of transsexualism. Nice.

Stay strong Fallon Fox. Put that key back in the ignition and I'll meet you on the highway. Don't think we'll meet any of the fat asses along the run who posted those comments. There faces are filled with potato chips, bellies with beer and hearts with fear.

Posted by planetransgender at 1:56 PM No comments: Links to this post 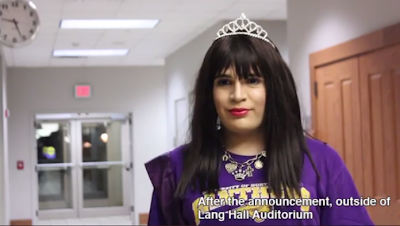 UNI senior Steven Sanchez never expected to be accepted and welcomed at any school. Because he grew up outside the gender binary he quit high school after being bullied by his peers.

“I’m not 100 percent man or woman,” Sanchez told the student newspaper on learning of his nomination to the court explaining “I don’t fit into either box.”

“I was so excited and my friend was like, ‘what is going on?’” said the senior communications major. “It was hard to contain my excitement for a week, before we were allowed to announce it.”

Sanchez is the first biological male nominated for Homecoming queen. He identifies as a male transgender student or gender queer, meaning he embraces the gender spectrum.

NI northern-iowan.org/   Executive Editor Linh Ta followed Steven Sanchez, the first transgender and biological male student to be nominated for Homecoming queen, before, during and after the Homecoming royalty announcement, Oct. 11, 2013.


Posted by planetransgender at 8:59 AM No comments: Links to this post