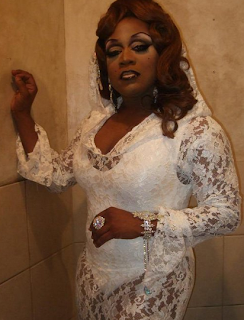 Drag diva Armani Nicole Davenport turned herself in to police on a warrant for negligent injuring after allegedly injecting a transgender woman with silicon.

The So called "Pumper Parties" are low cost high risk shortcuts to a curvy body. They are illegal, the substance injected toxic and the results are sometimes deadly.

The person who Davenport allegedly injected remains in critical condition according to Huffington Post.

June this of this year we welcomed the announcement by Nebraska Rhonda Blanford-Green, NSAA's executive director that a transgender inclusive statewide policy had been voted on and approved unanimously by board members.

The goal, she said, was to make sure that Nebraska schools had plans in place that would ensure that any student could participate in activities. She said it makes sense for schools to accommodate and protect transgender students just as they would students with disabilities or those who are minorities.

“All we're talking about is a checklist to make sure no kid — I don't care if you're a special needs kid, a gay kid, a black kid, a girl — you're not discriminated against,” Blanford-Green said.

The battle for transgender acceptance in the Cornhusker state is intensifying as the states hate groups have coalesced into one entity, "Nebraska Family Alliance" to more effectively fight progress.

Transgender people pose no threat in public accommodations. To this day there has has never been a substituted report of a transgender athlete infringing on a cisgender persons privacy.