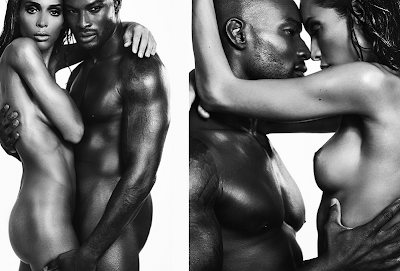 Hot and smart Persian expat Ines Rau is turning the world of cisnormality on its ear!

So Colorlines just has to know, who is this Ines Rau? Hip Hollywood wanted to know so bad they capitalized their query like a explanation point asking who is this "TRANSGENDER MODEL" who would dare pose with a cisgender hunk like Tyson Beckford.

Rau having traveled our road less taken offers this advice to our sisters and brothers considering gender alignment surgeries:

Having a sex change is not the answer to insecurities or other issues, a lot of transgender do not understand that it has to be done with reflection: because of a real deep desire to be a woman from a younger age. It’s fabulous the level of happiness- it’s just absolutely impossible to describe. I’m the happiest girl in the world, just being what I wanted to be. You have to love yourself enough to go for it without the fear of being judged or rejected. That’s my advice for them.

Seems the pictures are so steamy that Istagram and Facebook banned them!

Damn My babies FB and instagram keep Censured this Story lol with Tyson so im not posting anything about it... http://t.co/d6PTHFlhpJ
— Inès-Loan Rau (@Ines_Rau) October 31, 2013

Models.com has a great interview with Ines Rau and yes some more pictures of this gorgeous woman.

Her photo shoot can be seem in full at oobmag


Posted by planetransgender at 9:15 PM No comments: Links to this post

"It expresses myself and I think everyone else can wear it, so I wear it as well," Skyler told KCTV'5s Dave Jordan.

He was summoned to Assistant Principal Don Hillard's office after he wouldn't take it off.

"I went to the office and I refused to take it off, and they suspended me," the teen explained.

School personnel then called his mother, Leslie Willis, to come get her son.

"I was a little furious, and I called the school [and spoke to Hillard] to reverify the story, and yeah, he refused to take off his Vera Bradley bag, nothing more to it," Willis said.


She said she reviewed the student handbook but did not see a mention to bags or purses. She questions the suspension and the timing.

"Skyler has been going to school since August with that same Vera Bradley bag on, hasn't taken it off. What is the problem?" she asked.


In response to Blome's comments Thursday, Willis told KCTV5 that the bag rule should be a formal part of the student handbook so that there is no confusion. 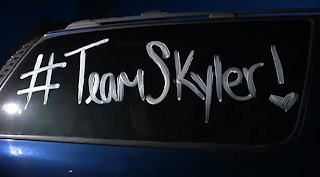 She said she supports her son and his choices. She said if he wants to carry a Vera Bradley purse or any other type of bag that he should be able to do so without being punished.

In an email, she said that her son went back to school at 1:30 p.m. Thursday with the bag in tow.

"He was pulled into an office, behind closed doors to tell him that he was never suspended for refusing to take off his purse, he got suspended for foul language," she wrote. "That's not the story that Mr. Hillard told me yesterday. Skyler is only 13 years old. He's just a child. And if this isn't bullying, I don't know what is."


Posted by planetransgender at 7:56 PM No comments: Links to this post

But even with broad religious exemptions ENDA is doomed in the Republican controlled house as Speaker Boehner has promised to kill it..


Speaker John Boehner (R-Ohio) on Monday said he is opposed to ENDA because it could open businesses up to lawsuits.

Conservative Republicans have ostracized nearly every portion of our republic who's not white or male. As if on cue to illustrate this chasm in Americana it is recognized that a black transgender man, Kaylar Broadus's appearance before the Senate Health, Education, Labor, and Pensions Committee last summer, the first transgender person to testify before the Senate, was tipping point.

Meet the 32 Republican Senators  who voted to continue discrimination against LGBT people in the workplace.