Breaking: Group claims to have enough signatures to force a vote on Ca student Transgender rights 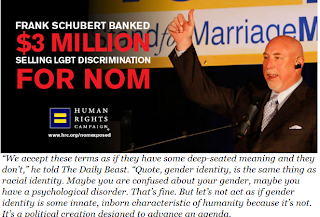 The political strategist who is coordinating the fight against AB 1266 has told the AP they have collected enough signatures to force a referendum.

AP: Opponents of a new California law that gives transgender students certain rights say they have collected enough signatures for an initiative that could repeal the law.

Frank Schubert, the political strategist handling the signature gathering effort for conservative groups, said Sunday that the group submitted 620,000 signatures to get the initiative on the November 2014 ballot. To qualify, at least 505,000 valid signatures must be submitted.

If there have been enough signatures collected as Schubert claims a qualification process must validate those signatures. There is no mention of this on the central hate groups web page.


Posted by planetransgender at 8:35 PM No comments: Links to this post

Pink Panther LGBT summarily bans Wrangler dissension on Facebook. Will they ban you too?

Posted on the Denver Wrangler web site
http://denverwrangler.com/news/open_letter_from_the_pink_panthers_movement1. Colorado law only says that establishments must ensure people embibing are of age. 2. I am happy that someone went to the Denver Wrangler and had a good time. I don't doubt they did on that particular day. 3. Expressing a view is not slanderous. I am positive that if I or Cristin Williams or any of the mainstream publishers slandered the Wrangler they wouldn't have hesitated in bringing a lawsuit.
What followed has just as deplorable. The Denver Wrangler pressured the members of the charities it helps to support by telling individuals they would be unwelcome if they talked about that incident or even remained friends with the victim.
The Denver Wranglers paid representives then went after myself and the TransAdvocate where my planetransgender article was cross posted.
http://planetransgender.blogspot.com/2013/09/watch-denver-wrangler-gay-bar-deny.html http://www.transadvocate.com/watch-denver-wrangler-gay-bar-deny-entry-to-a-drag-queen-telling-him-hes-not-transgender.htm
They demanded we take down the pictures and in private messages demanded I delete my article from facebook. They succeeded in pressuring facebook to censure my article and deleted Vito's Youtube video. But their bullying only served to increase my resolve to stand with Vito.
To my knowlage anyone who has dared to question the Pink Panthers to this point about there reaction to the Wrangler incident has been banned from their page. I am asking that you question this as well. Would you belong to a group who whould summarily banned
dissent?
I doubt it. Like there letter said on the Wrangler post they claim to welcome dialog.
Will they welcome yours?
http://outfrontonline.com/focus/news/wrangler-protest-points-to-conflict-in-laws/
http://www.denverpost.com/breakingnews/ci_24135184/bar-customer-leads-boycott-after-being-turned-away
Will they ban you if you attend today's protest at the Denver Wrangler?

Posted by planetransgender at 3:42 PM No comments: Links to this post 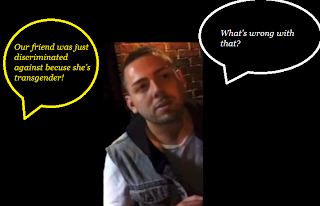 On Friday November 8th at about 3:30am Alissah Brooks was illegally denied public accommodations access by employees of Don Pollo's who refused her entrance because of her gender identity. Don Pollo's facebook page makes no mention of the establishment being a members only nightclub.

A male employee appears and asks, “What’s the problem?” One of Brooks’ friends explained, “The problem was she’s a transgender and [the bouncer] denied her entry.” Without skipping a beat the employee asks, “What’s wrong with that?


Too small to read manager Luis Munoz? You can click the link or read it here....especially for you...

(a)
Except as is exempted in subsection (b) of this section, it shall be unlawful for any person, whether acting for himself/herself or another, being the owner, lessee, proprietor, manager, superintendent, agent or employee of a public accommodation, to engage in or cause another to engage in any of the following prohibited acts, or to allow a subordinate employee of the public accommodation to engage in any of the following prohibited acts, in any public accommodation in the legal limits of the City of Atlanta:
(1)
Denial, refusal, rejection, or granting or any privilege, service, goods, merchandise, advantage, facility, membership, commodity or accommodation because of an individual's, or the perception of an individual's, race, color, creed, religion, sex, domestic relationship status, parental status, sexual orientation, national origin, gender identity, age, disability, or the use of a trained dog guide by a blind, deaf or otherwise physically disabled person.


Posted by planetransgender at 10:25 AM No comments: Links to this post