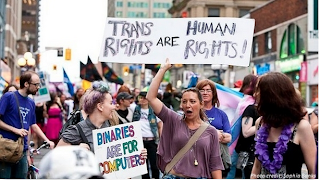 Secular Woman is a organization which amplifies the voice of non religious woman. Being humanists they also considers" the term woman to apply to anyone who presents herself as a woman or says she is one.

They also prescribe to many of the tenets of feminism and as such, abhor discrimination against womankind regardless of its origins.

Almost as if on cue Gender Identity Watch responded to the petition further validating its purpose:

"Calling political speech that does not toe the liberal line “hate speech” is a common tactic of Queer and Liberal organizations. Rather than free and open debate, such MRAs want you to embrace thought-terminating cliches like  ”Transwomen are Women.” These MRAs – who are invariably White Males who “identify” as Women or heterosexual “Queer” Women who have no investment in Lesbian community – continually harass the Southern Poverty Law Center, which actually has its hands full tracking racist hate groups across the country."

TERF's attack trans people and gender non conforming people not for the sake of feminism but out of pure unadulterated hate. This group of people have done as much to damage transgender peoples acceptance as other groups identified as hate groups by the SPLC.

Fact. Googling the transgender student by her name returns only one result. The main stream media article, the only article calling her by name, has been edited and the accompanying video deleted.

That is not the first time Brennan has stooped so low. In 2012 she outed a transgender student  to his school and mocked him as he attempted to apologize for a ill advised joke made after she provoked him on twitter. Then she did it again in 2013 to Jane Doe by publishing her birth name.

This sort of behaviour is unequivocally unjustifiable malicious hate. and I implore the SPLC to monitor GID Watch and there accompanying TERF antagonists.

Posted by planetransgender at 7:57 PM No comments:

So why does Evans-Smith think Fallon Fox and other trans people should be segregated?

"She (fallon Fox) did have did have a unfair advantage."

And that was after Ashlee Evans-Smith she she won because she hit harder, grappled better, had better ground techniques, cardio and leg strength.

Would I fight Fallon Fox again? "No because I want to fight someone and I think all other woman want to compete against people on a equal playing field."

"Oh and I hope LGBT people please don't hate me."

Ironically after reading some of the comments on Youtube it appears that the Ashlee Evans-Smith interview enlightened many who were previously opposed Fallon Fox fighting other woman.

Fallon Fox responds to this interview rather incredulously on Outsports:

I am not an "other." I am female, a woman. I am classified as a transgender woman or transsexual woman. The terms simply label the type of woman that I am. Black woman, white woman, lesbian woman, and straight woman are other examples of labels we put on different types of women. Saying that I should be segregated in a class of only trans women is ignorant and discriminatory. It's much like how they tried to say that black women shouldn't be allowed in track when they first competed. They said they belonged in a separate category all to themselves.
Every minority in sports has to go through this, and all because of ignorance and fear. It's only been within the last hundred years or so that modern medicine has created the ability for people to change their sex. Individuals like myself will have to struggle against the mindset of people like Ashlee Evans-Smith. It's sad that we have to repeat history over and over again. But, this is the reality.
I wonder if Ashlee Evans-Smith recognizes the historical irony of her discriminatory beliefs.

Posted by planetransgender at 5:35 PM No comments:

Florence High School Board upholds Superintendent's Ruling: Transgender student will continue to use the girls room 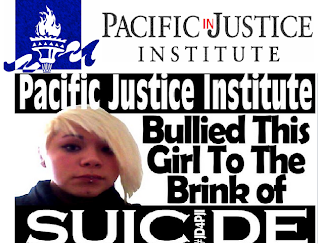 Pacific Injustice Institute losses, again. In an ill advised publicity stunt the lawyers at the California P(in)JI failed to force a Colorado transgender girl to use the boys room.

After losing the California Marriage equality battle the P(in)JI needed another cash cow to milk. So these lawyers singled out a lone Colorado transgender high school student to sensationalize their currentfight against California transgender student equality legislation. Why all the way to Colorado? Because there were no instances of transgender students acting improperly in all of the California school districts that previously enacted trans specific equality rules.

And now we also know there have been no instances of Colorado transgender students acting inappropriately. On behalf of all minorities I would like to make it known that our existence is not criminal regardless of how "uncomfortable" we make some people feel.

"Vendetti was asked to look into the issue by an attorney representing the families of three girls. The girls reported harassment from a male student who identifies as a female."

"Florence police investigated the alleged harassment, however the detective assigned to the case was unable to substantiate any criminal charges when the girls declined to be interviewed." - Pueblo Chieftain.

From the Paific (in) Justice web site:::

Cristan Williams at the TransAdvocate called the school and talked to Superintendent Rhonda Vendetti:::


Posted by planetransgender at 2:22 AM No comments: