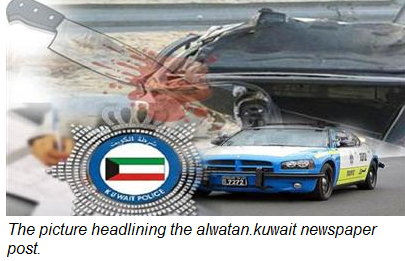 Alwatan.kuwait reports that Kuwait police are continuing there persecution of transgender citizens. Last week an unnamed transgender woman who had been frequenting a Kuwait city hair salon was arrested after another patron reported her to the police.

The Huffington Post is reporting that there were six other transgender woman arrested the previous week and charged with "imitating the opposite sex".

Transgender people in Kuwait are tortured and sexually abused by police according to a 2012 Human Rights Watch (HRW)report "They hunt us down for fun" as reported by ahram.org.

Source: alwatan.kuwait [google translate] what seems to be a celebratory post:

"Wrote Abdullah joyful: referred Men Investigation fovea citizen Michbha women to the public prosecution yesterday after it revealed a citizen of the salon lady area around a fully decorated and found that the frequency on the saloon times and did not recognize him one. in details: Submit salon owner feminine area around a complaint to the police station fovea said it that working in the salon told him that there Michbh women inside the salon that I have met one of the customers, and it gave the Director of Investigation Hawally Colonel Abdulrahman neighing instructed the men Detectives fovea to adjust the perpetrator and take legal action against him and formed a task force for this purpose led submitted Ammar Al-Muhanna and Lt. Hamad Al-Kandari and headed accompanied salon owner to adjust the accused and when they enter the salon were surprised by the full Onotth b «Mickey August», hair and at the request of demonstrable sure as a man and not a girl, and it was referred to the competent authority. security source said: it shows in the investigations that imitating frequency at the salon several times not detected by one and that He used to come and work Milesmh of things cosmetic, adding that operating the saloon said that he accepted and their customers more than once as a girl. , and it was a necessary right and recording «cocktail» of the cases against him, including indecent assault and entering a place dedicated to women and is similar to other sex and referred to the prosecution General to take legal action against him."


Posted by planetransgender at 8:26 AM