Immediately, after the Fairness for all Marylanders act was passed ultra-right wing delegate Del. Neil Parrott announced that he would try to repeal it.

The specter of having a majority vote on a minority's right is daunting enough. Added to that PETITION. MD had a slick online process with which they had previously collected enough signatures to force votes on progressive legislation.

But this time the public wasn't taken in with their hate mongering, dismissing the fears that were trying to instill in them by warning of predictors who were actually men, but in their minds thought they were a woman (sic) Transgender woman, who would use the "Bathroom Bill" to prey on children.

Having lived in Maryland this was personal. In 2011, I was a part of coalition of transgender people who fought tooth and nail against Equality Maryland. We opposed a trans bill supported by them and HRC that was stripped of public accommodations provisions, resulting with the implosion and subsequent rebuilding of EQMD.

This year they got it right and besides a little inconsequential sour grape by wannabe stars, the whole community got behind this.

The tension increased with every tick of the clock as May 31, 2014 as Midnight was the cutoff for Petition.Com to submit the required signatures.

Midnight in Annapolis: Opponents of Fairness for All Marylanders Act Fail to Send Law to Ballot 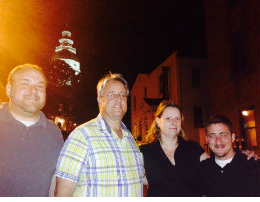 In May, Governor Martin O'Malley proudly signed the Fairness for All Marylanders Act that added gender identity and expression to Maryland's non-discrimination law. However, an opponent of the law, Delegate Neil Parrott, launched a signature collection effort to put the law on the November ballot.

The deadline to submit the first third of the required signatures to the Secretary of State was midnight last night, May 31.

Standing at the Secretary of State's office in Annapolis at midnight key leaders in the effort to pass the law were overjoyed when no one appeared to submit signatures. Therefore, the Fairness for All Marylanders Act will go into effect as planned on October 1.

HRC was proud to be a leader in the effort to pass the bill along with Equality Maryland and others. We also recognize the strong and strategic support from Senator Rich Madaleno and Delegate Luke Clippinger.

P.S. On a personal note it was very special to be standing in Annapolis at midnight with others for whom the fight for LGBT equality is more than just politics; it is personal. Why else would we all be standing outside the Secretary of State's office at midnight? For years, it has been my pleasure and honor to get to know Senator Rich Madaleno and Delegate Luke Clippinger. Their personal commitment to and leadership on marriage and transgender equality has helped make Maryland a national leader on equality. They are dedicated public servants.

Carrie Evans, Executive Director of Equality Maryland, and a former colleague at HRC, has fought hard and smart for LGBT equality for well over a decade. Her personal commitment and political savvy has helped make history in Maryland and beyond. I'm honored to be standing alongside such leaders, no matter the hour.

Posted by planetransgender at 12:24 PM