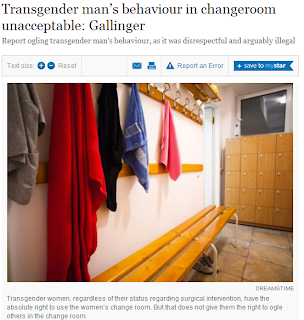 Today's story by Ken Gallinger the Toronto Star's  "Ethically speaking columnist" is, well highly unethical. At best its lazy journalism. Worst case its a mainstream writer using his bully pulpit to amplify hate and fear of transgender people. The headline misgendering trans woman combined with the accompany image and an absence of sourcing or anything indicating this as an alleged occurrence gives the accusations of the alleged victim validity.

A cisgendger woman wrote to him about an alleged occurrence in a dressing room that if true would invoke the wrath of trans people as well as cisgender.

"I am a senior woman. Recently, a “man” claiming to be transgender, who had not yet begun physical treatments, was permitted by our local Y to use the women’s locker room. There are no secure change rooms. The person they allowed in was not courteous and stared at me while I struggled out of a wet bathing suit. He was naked, had an erection and playfully asked ‘do you come here often?’ I understand that gender is no longer judged solely by genitalia, but does a brief contact with the duty manager mean that men not yet committed to gender reassignment are free to disrobe anywhere they choose?"


Gallinger then goes on to state law and his opinion never once questioning the validity of the story or supplying interviews with witnesses or the Y's manager. As a sister Journalist and one with an agenda I am aware of the importance of journalistic integrity, obviously not an issue for Mr. Gallinger. 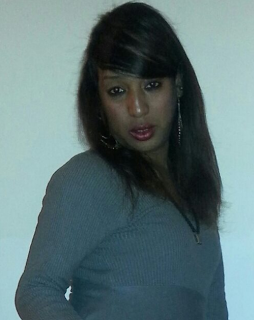 Rudrani Chettri, a well known trans activist from New Delhi, India has reported being attacked by a police officer after she refused to allow him to molest her.

Gay Star News is reporting that the police are refusing to investigate but this did not surprise Ms Chettri who posted about it on her face book saying only "Expected after 377 judgment......."

Just a few days before Ms Chettri was denied entrance to a shopping mall by guards concluded “Who is an Indian? Someone who is Man enough or Women enough…Being Hijra, I am not Indian enough”. 
Posted by planetransgender at 2:10 PM No comments: Links to this post 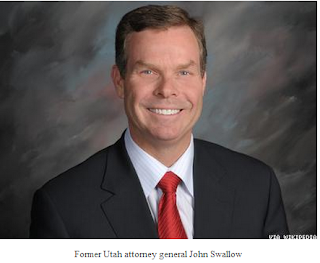 Emails between staffers exchanged during Swallows reelection campaign under the heading of "feeding" disparaged Republican delegates calling them "goat's after a tin can" because they were paying for meals during the convention..

Yes, they were talking about their own party members. They were just getting warmed up.

Other emails exchanged between staffers discussing a photo of the transgender delegate one staffer said she didn't want a 'up the skirt shot' of the delegate referring to her as "the infamous cross dresser".

According to Talking Points  "the emails were made public in court documents unsealed on Thursday, and were part of an affidavit tied to the investigation of Swallow, fellow former Utah Attorney General Mark Shurtleff, and others. The documents were first reported on by The Salt Lake Tribune."

Coincidence or not?  The former Attorney general  is also under investigation for illegally accepting money from payday loan companies while a few states away  the Burnt Orange Report has revealed Governor Perry has appointed a vice president of a payday loan company to oversee the Finance Commission of Texas.

Coincidence of not? Texas's leading Republican for the Governors office is Attorney General Greg Abbott who is also vehemently opposed to LGBT rights and who would also benefit by his connection with predatory loaners