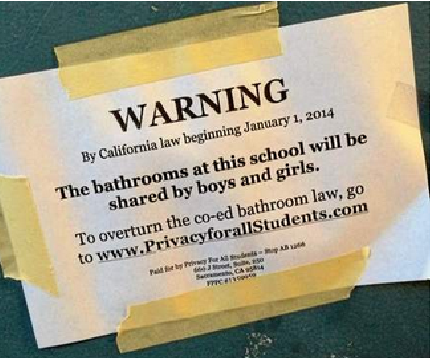 Filers like the one to the left posted in public school restrooms combined with the lies of the signature gathers drove enough people to sign a petition calling for a public vote on AB 1266. The petition fell short of the number of valid signatures needed to automatically force a vote.

Now each and every signature will now be checked for authenticity and if a certain amount are valid, AB 1266, the bill which levels the field for transgender California school children will be voted on.

Last week a court gave special privilege to the hate group sponsoring this drive and ruled that the signatures that were delivered after the post office closed on the cutoff date would be allowed, thus adding enough valid signatures to reach this point.

"Privacy for students" is rejoice  in demonizing trans student in their effort to force a vote on a law helping trans student succeed. But let it be known, gay and lesbian folks, if they succeed in this they will not stop.


Posted by planetransgender at 8:46 AM No comments: Links to this post