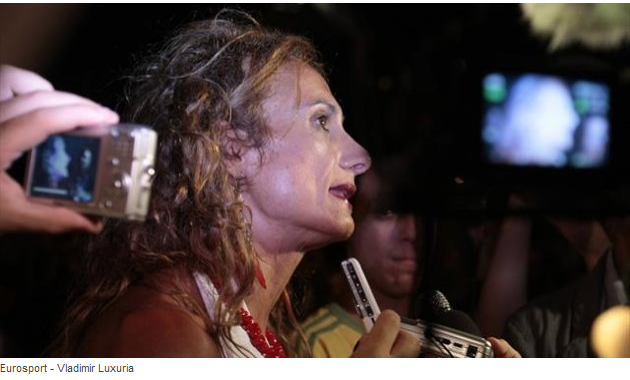 Vladimir Luxuria the former MP of the Communist PRC and first transgender person elected to the Parliament in Europe was arrested today by Russian police as she waved a rainbow flag at the winter Olympics in Sochi.

"attitude of the agents was brutal and aggressive. Nobody speaks English"

Luxuria now sits alone in a room with neon lights on the face, allegedly in police custody after tweeting a picture of herself in Medal Plaza in front of the Olympic rings, holding a fan with the colors of the rainbow flag of peace.

""I'm in Sochi! Greetings with the colors of the rainbow, in the face of Putin!""

Yahoo Italia sports reports "Luxuria's post, in protest against homophobic laws of Vladimir Putin have prompted several state leaders to boycott the opening ceremony. The Russian president, however, in the past days had tried to defuse the controversy by being embraced to resume skater Irene Wurst, Dutch star speed that has never hidden his homosexuality. Before the news of the arrest of transgender, born Wladimir Gain, had also issued a statement a spokesman for the Gay Center, Fabrizio Marrazzo." 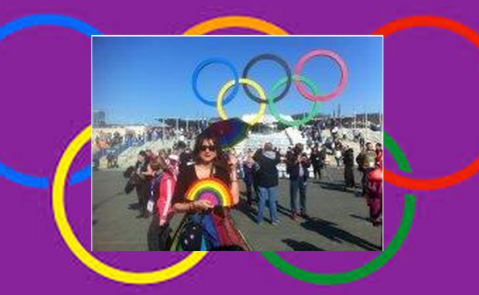 Posted by planetransgender at 7:33 PM No comments: Links to this post

Today at 1:28 PM
THE WHITE HOUSE
Office of the Press Secretary
FOR IMMEDIATE RELEASE
February 16, 2014

Statement by the President on the Anti-Homosexuality Bill in Uganda

As a country and a people, the United States has consistently stood for the protection of fundamental freedoms and universal human rights.  We believe that people everywhere should be treated equally, with dignity and respect, and that they should have the opportunity to reach their fullest potential, no matter who they are or whom they love.

That is why I am so deeply disappointed that Uganda will shortly enact legislation that would criminalize homosexuality.  The Anti-Homosexuality Bill in Uganda, once law, will be more than an affront and a danger to the gay community in Uganda.  It will be a step backward for all Ugandans and reflect poorly on Uganda’s commitment to protecting the human rights of its people.  It also will mark a serious setback for all those around the world who share a commitment to freedom, justice and equal rights.

As we have conveyed to President Museveni, enacting this legislation will complicate our valued relationship with Uganda.  At a time when, tragically, we are seeing an increase in reports of violence and harassment targeting members of the LGBT community from Russia to Nigeria, I salute all those in Uganda and around the world who remain committed to respecting the human rights and fundamental human dignity of all persons.

President Yoweri Museveni has stressed that there is no debate regarding the promotion of homosexuality, those who are homosexuals for mercenary reasons and the promotion of exhibitionalism saying these should not only be dealt with by law but also harshly. -  Source 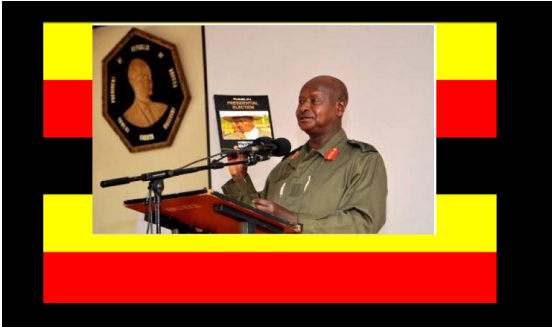 Museveni was involved in the war that deposed Idi Amin Dada, ending his rule in 1979, and in the rebellion that subsequently led to the demise of the Milton Obote regime in 1985; however, parallels have been drawn between the NRM and its predecessors. For instance, the NRM-sponsored Public Order Management Bill is strikingly similar to the 1967 Public Order and Security Act, codified by the Obote regime, in that both bills "seek to gag dissenting views." Museveni's statements are also reminiscent of Uganda's dictatorial past: "Whoever tries to cause problems, we finish them. Wiki.

The 'scientific' study Museveni  quotes as justification even though he said it wasn't essential to his 'decision'.


Posted by planetransgender at 2:16 PM No comments: Links to this post

Last year amid much applause the City of San Antonio passed an amendment to its non discrimination ordinances to include LGBT people. The ordnance which repeatedly and pointedly promises no delays to employment complaints brought San Antonio in line with the other large Texas cities.

The first complaint was filed shortly after by Matthew Hileman, who worked for ATT, which contracted to the city. Hileman said ATT stood by idly as co workers mocked and threatened him for being transgender, even posting defamatory note on his chair.

The city didn't delay acting on the complaint. They stonewalled Hileman.

The city told him in a letter embedded below, that they would not act until ATT and the contracting company he was employed by voluntarily submitted their internal reviews.

A company will never release internal investigations, unless they are required to and the San Antonio bureaucrats knew that. They also told him they needed an investigation by the federal governments EEOC office before they proceeded. None of those requirements were included in ordnance, which is posted below.

In fact, the city did not act until local media put a spotlight back on the case.

According to Lonestar Q , the city has requested its first meet with Hileman on Tuesday February 18th, two months after filing the complaint.

.
City Letter
Response Letter - 021214 - Hileman NDO
Sec. 2-558. Complaints, procedure. (a) City employees may register complaints of discrimination with the city equal employment division, and complaints will be given prompt consideration. An investigation to determine the cause for the complaint will be conducted and findings will be acted upon without undue delay. (b) All complaints will be investigated by the equal employment opportunity division and findings submitted to the city manager or designee without undue delay. Findings also will be relayed to the complainant and other persons officially involved. If it is determined that a violation has been committed, the situation will be corrected without undue delay. (c) Discrimination complaints will be submitted in writing to the equal employment opportunity division. The equal employment opportunity division will be available to assist in aiding city employees who may lack the skill to submit the written report. (d) An interview with the equal employment opportunity division will be scheduled to verify the following: When the alleged violation occurred. Against whom the alleged discrimination was registered. Location of the alleged offense. Person allegedly discriminated against. Nature of the alleged offense. Names of all persons and witnesses involved. Remedy sought by the complainant. (Ord. No. 2013-09-05-0577, § 1, 9-5-13)
Posted by planetransgender at 10:40 AM No comments: Links to this post