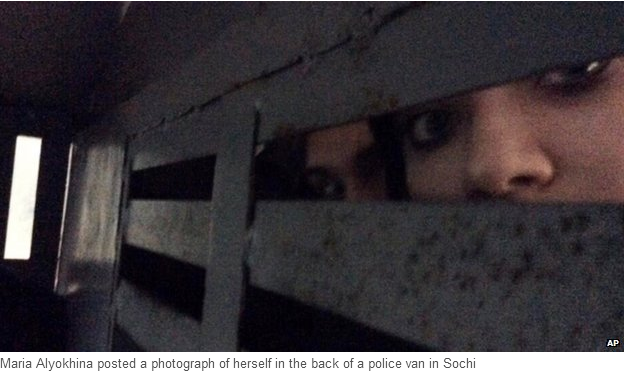 Two members of protest group Pussy Riot have been arrested by Russian police in Sochi, where Russia is holding the Winter Olympics, the activists said on Twitter.

Pussy Riot member Nadzehda Tolokonnikova says she has been detained and accused of robbery.

"When we were arrested, we were not performing any kind of action, we were just walking around Sochi."

Her bandmate, Maria Alyokhina, said she had also been arrested.

The pair were arrested in central Sochi, about 30 kilometres north of the main Olympic venues.

Ms Tolokonnikova said she and Ms Alyokhina had already been in Sochi for more than a day, with the aim of performing a new song titled "Putin will teach you how to love the motherland".

She said that before their arrest they had already managed to stage "some Olympic performances" without giving further details.

They had both previously denounced the project spearheaded by Russian president Vladimir Putin to host the Games and called for a boycott of the Olympics.

The radical art group Voina (War), which is run by Ms Tolokonnikova's husband Pyotr Verzilov, said seven other people had been arrested as well as the Pussy Riot girls.

According to Ms Tolokonnikova, another unnamed third member of Pussy Riot was also arrested.

They were being taken in a police van to the police station in the Adler district which is closer to the Olympic venues.

The women were in 2012 convicted of hooliganism and sentenced to two years in prison colonies after staging their so-called "punk prayer" in the Cathedral of Christ the Saviour in Moscow.

They were released in December last year under a Kremlin-backed amnesty.

The stunt came just ahead of Mr Putin's re-election to the Kremlin in March 2012 and was aimed at denouncing the Orthodox Church's support of the Russian strongman during the campaign.

Their jailing turned them from little-known feminist punks who staged a handful of guerrilla performances in Moscow to the stars of a global cause celebre symbolising the repression of civil dissent under Putin's rule. 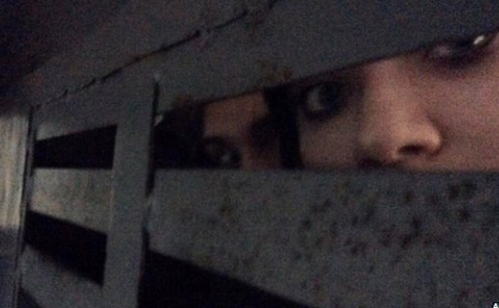 Posted by planetransgender at 7:49 AM No comments: Links to this post