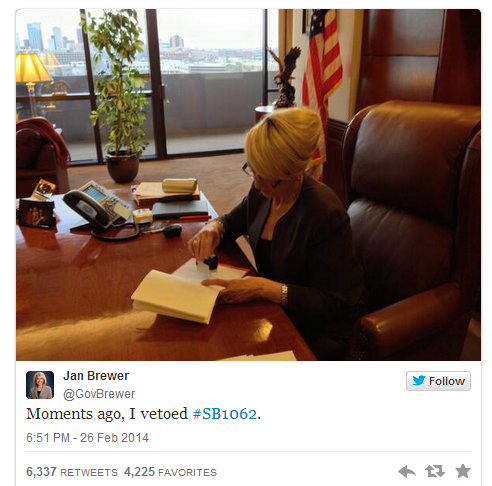 The bill that would have not only allowed, but encouraged people to discriminate met a righteous demise as this afternoon as Arizona Governor Brewer put a stake through it's heart.

After her tweet meet Rocco DiGrazia, the pizza joint owner who put a face on whom the bill would have hurt. Of all the people who opposed the bill, the Republican senators, the  business owners the corporations, Rocco's voice spoke the loudest from his heart straight to Jan Brewers ears. Thank the stars she heard.

Editor's note: Rocco DiGrazia describes himself as a "failed anthropologist and thwarted musician, but a decent father and passable pizzaiolo." He owns Rocco's Little Chicago Pizzeria in Tucson, Arizona, and is married with two children.
(CNN) -- On Wednesday, Arizona Gov. Jan Brewer rightly vetoed the state bill that would have allowed businesses to deny service to gay people on religious grounds. I had a bet with a friend that she wouldn't sign it -- and wonder why it took her so long. She won't take a hit to the pocketbook -- she's too savvy for that.
In the days leading up to this, I put a sign in the window of my pizzeria that said: "We reserve the right to refuse service to Arizona legislators." The reaction was vastly and overwhelmingly positive, with only a few people telling me they wouldn't ever eat at my restaurant again. Mainly, we have received many, many messages of support; phone calls, e-mails and texts, from people who live in Tucson, across the state and even from outside the United States. 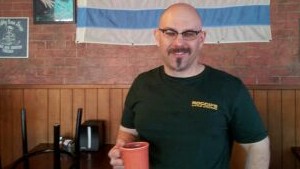 Arizona pizzeria owner Rocco DiGrazia says he can't condone discrimination against one group of people.
The sign is part of a tradition we have. When I moved into the supposedly cursed restaurant space on Broadway in Tucson, Arizona, 15 years ago, I found a box of letters -- the kind you put on a marquee sign out front. By the end of the day, I had a message on the sign. We've been changing it every day since. I am often told people plan their routes to see what we have to say each day -- even if just for a chuckle.
Sometimes we put up song lyrics, or a snarky comment about someone in the news, such as Anthony Weiner. One day we put up "Free Pussy Riot." Some people get their knickers in a twist about our messages, but we do it for ourselves as much as anything.
Then I learned that the state Senate once again passed an appalling bill that attempted to save me from my fellow Arizonans. I thought, "Oh no, not again." If anything seemed ripe for parody, this was it.
It was irresistible. I instantly typed a comment on my Facebook page, saying that the busybodies in the capital of Phoenix were not allowed to come in and sit at my table. Minutes later, one of my followers supplied the sign that so eloquently expressed my viewpoint. I laminated it, and by that afternoon it was on my doors.
Since then, a lot of similar signs showed up in the windows of Tucson businesses saying "We reserve the right to serve anybody." Tucson is a little more liberal than Maricopa County and Phoenix: We're a university town. People here just don't care about things like that. At restaurants, we just serve you and smile.

Posted by planetransgender at 8:03 PM No comments: Links to this post