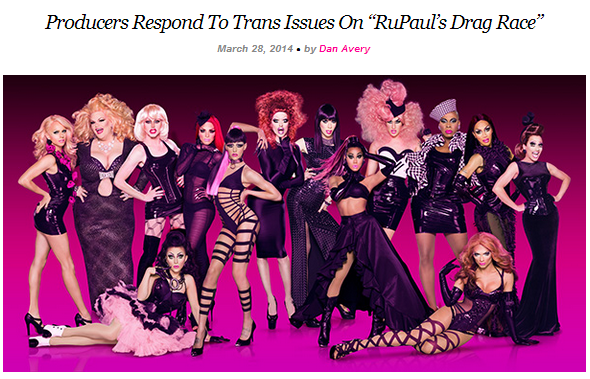 In what could be heralded as a major victory and a possible changing of the guard GLAAD has responded to the trans communities outrage regarding Rupauls Drag race 'She He' challenge.

The Internet was rife with people upset with Rupaul for using trans defamation for profit, as was I.

But my anger was primarily focused at GLAAD for their historical acquiescence to the Drag shows transphobic rhetoric and I said so here on the Transadvocate and the Daily Kos.. Using phrase 'He-She' promotes violence regardless of who says it.

Parker Marie Molloy, noted transgender journalist with the Advocate wrote about how "RuPaul Stokes Anger With Use of Transphobic Slur" and contacted GLAAD:


"When asked for comment on last night's episode of RuPaul's Drag Race, GLAAD vice president of communications Rich Ferraro responded, "While some drag queens may use the term to refer to themselves, 'she-male' is too often used by others as an offensive term to denigrate and hypersexualize transgender women. Unfortunately, most Americans are still unaware that there is a difference between gay men who perform in drag and transgender women. That's why GLAAD will continue to tell the stories of trans women like CeCe McDonald, Carmen Carrera, and CrossFit athlete Chloie Jonsson."

Mr. Ferraro posted this comment on the original planetransgender post calling them out leading me to believe it was just business as usual.

But yesterday, the drag show's executive producers released this statement:

“We delight in celebrating every color in the LGBT rainbow. When it comes to the movement of our trans sisters and trans brothers, we are newly sensitized and more committed than ever to help spread love, acceptance and understanding,” said RuPaul Charles, Fenton Bailey, Randy Barbato, Tom Campbell, Steven Corfe and Mandy Salangsang

Logo said, “We have heard the concerns around this segment. We are committed to sharing a diverse range of trans stories across all of our screens and look forward to featuring positive and groundbreaking stories of trans people in the future.”

GLAAD's  statement was somewhat defense. They said that they contacted the show the very next morning after the show aired but said that it took time to work with the show.

Fair enough, but what of all these years where instead of calling out Rupaul for transphobic speech you awarded him and pimped his show?

To my knowledge this is the first time that GLAAD has criticised RuPaul or the drag race. That would not have happened if our the transgender community and cisgender people of good will  hadn't shouted in outrage. It wasn't gental dialouge that got GLAADS attention.

Sometimes it gets to the point where you just have to shout out loud to be heard and that's what we did. Loud and Proud.
.

Posted by planetransgender at 4:53 PM No comments: Links to this post

The day after the Maryland house of Delegates passed legislation making discrimination against transgender people illegal, one group has decided to take action against it.

The bill, SB 212 "Fairness for All Marylanders Act of 2014" amends the state's law to include gender identity in work place, housing and public accommodations.

The Baltimore Sun is reporting that the conservative group MD Petitions emailed subscribers telling them:


""The good news is that we don't have to accept this bill as law – there is another way to defeat this terrible bill,"

"The group invented an online process in 2011 for collecting signatures, which allowed them to petition a law to referendum for the first time in two decades. By the 2012 election, MdPetitions.org successfully put three laws onto the ballot: same-sex marriage, the congressional redistricting map, and in-state tuition for certain undocumented immigrants. Voters upheld all three."

The major player in the bills passage the Maryland TransEquality issued this statement by Carrie Evans, Executive Director of Equality Maryland,

“This is the culmination of a very long and sustained effort by Equality Maryland to ensure transgender Marylanders are included in our state’s anti-discrimination laws. Today’s win is the result of so many people and organizations – transgender individuals and their families showing up and telling their stories year after year, elected officials like Senator Rich Madaleno and Delegates Luke Clippinger, Bonnie Cullison and Joseline Peña-Melynk , many years of dedicated and committed Equality Maryland Board and staff, amazing coalition partners like the Human Rights Campaign and so many more people and organizations that we will highlight in the coming months.”

SB 212 now heads to Governor O’Malley’s desk, who stated at MCTE’s Lobby Day last month, “I am waiting to sign it.”

But not everyone is thrilled about the bills passage. House Minority Whip Kathy Szeliga told Delmarva now


“We need to know whose safety comes first. We should be very concerned about the safety of women and little girls, because what this allows without striking accommodations are possible predators and pedophiles from going in our women’s restrooms,” said Szeliga R-7-Baltimore County. “I think the rights of women and little girls safety should come before that of anyone else.”

Promoting fear of transgender people using children as a weapon is a time honored tradition of hate mongers and bigots but one that has no basis in reality.

Posted by planetransgender at 12:35 PM No comments: Links to this post