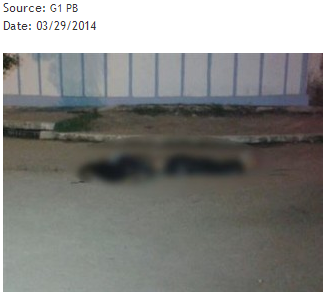 A transgender woman, looking 29, was found dead after being beaten by several people in Guardência Street, near Hope Square in the South Downs together in Joao Pessoa , on the night of Friday (29), according to the Bureau of Homicide capital. The suspicion civilian police is that, besides being beaten, the victim was struck by blows from melee weapon due to perforations that officers found the body.

The crime occurred around 23h. The Military Police was fired after receiving a call that a woman was being beaten and dragged through the street. In the record of the occurrence made by Homicide Division stated that the identification of the victim is unknown and the only object apprehended on site was a mobile device.

Local residents said they did not recognize the victim as area resident. The body was sent to the Management of Medical and Forensic Dentistry (GEMOL), Christ in the neighborhood.

Posted by planetransgender at 6:40 PM No comments: Links to this post 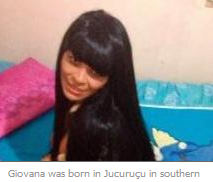 The Bahian transsexual Giovana Souza Silva, 33, was gunned down in the south of São Paulo late on Thursday, 28.

According to information of the 27th Police Precinct, which registered the police report, the incident occurred at about 21:30, between Meadow Street and Avenue Indianapolis Taborda, in Jardins neighborhood.

According to police, Giovana was born in Jucuruçu but her family resides in nearby Itamaraju (distant 751 km from Salvador), in southern Bahia.

Still no information about the authorship and motivation of the crime that is being investigated by Homicide (DHPP) in São Paulo.

Info realize that Giovana be vying for a spot of prostitution when she was killed, but this has not been confirmed by police.

As the 27th Precinct, Giovana's body was taken to the Forensic Medical Institute (IML), located in the neighborhood Aclimação and then should be taken to Itamaraju, for burial.

[Translated by Google] Source http://m.atarde.uol.com
Posted by planetransgender at 6:23 PM No comments: Links to this post