The women are considered sacred in India's culture and their blessings are often sought - especially for newborns and newlyweds - because they're believed to bring luck and fertility.
In the video, the Hijra dress in matching saris and act as flight attendants and they fill the lanes between cars at a busy intersection during a red light.

"May I have your attention please? If you're going to drive like a pilot then you should know some things. Your car doesn't have an oxygen mask. Under your seat you won't find a life jacket," a woman asks using a megaphone. "But you do have a seatbelt. So why aren't you wearing it, honey?"

"Your pretty face won't look so good after an accident," she warns and then chides some motorists for filming her instead of wearing the seatbelt.

As the light turns green the cars drive off, and the Hijra give out their blessings as promised to those who are wearing their seatbelts.

Published on May 5, 2014
We wanted to remind reckless motorists about a very basic safety procedure they'd forgotten.
In rather unforgettable fashion.

A public service initiative by VithU and Ogilvy and Mather, Mumbai.
Read more: Daily News
Posted by planetransgender at 8:44 AM No comments:


NEW ORLEANS (WGNO) - An arrest warrant has been issued for a transsexual pageant queen accused of illegally injecting silicone into a transgender woman who later died.

In January, 25-year-old Brad Hall (aka Brenisha Hall) died after receiving illegal silicone injections which put her in a coma months earlier. 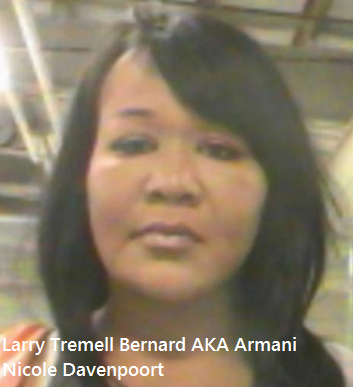 Last year, New Orleans police arrested Bernard for practicing medicine without a license. She has since been out on bond and is currently living in Dallas, Texas.

Once apprehended Bernard will be booked on one count of negligent homicide.

Negligent homicide carries a penalty of up to five years behind bars.

If you have information into the whereabouts of Larry Bernard (Armani Nicole Davenport) you’re asked to call Crimestoppers (504) 822-1111. You can remain anonymous.


Posted by planetransgender at 8:11 AM No comments: