A Cottage. An Apartment. Connecticut DCF has used these terms to placate the community and lead us to believe that Jane is now in a homey place with TVs exercise equipment, fluffy bed and a kitchen all her own.

Please. Jane's been moved from one isolation cell to another solitary cell. Looking at the google map of York I would dare anyone to tell a welcoming place exists within its walls.

The girl, 16, who has been identified as Jane Doe to protect her identity, is not charged with any crime. State Department of Children and Families officials say she has to be at York Correctional Institution in East Lyme because she allegedly physically attacked staffers and other residents at juvenile psychiatric treatment centers.

He was dismissive of the decision to move her to what DCF officials have called a “cottage” or “apartment” at York. DCF spokesman Gary Kleeblatt released a statement describing a bedroom, private bathroom and a “programming/recreation area.”

“She is not in a ‘cottage,’” Romano said. “That word creates the illusion of Mother Goose.”

As for it being an “apartment,” Romano said, “She’s in prison! It’s a disgrace to see DCF again attempting to distance themselves from what they’ve done: putting a child in jail. They’re trying to cover it up with their use of language.”

The move was described as "interim" by DCF.

The May 15 editorial by the Hartford Current wants to know exactly how long is interim?

ll parties to the controversy seem to agree that moving the 16-year-old transgender girl called Jane Doe from the mental health unit of York Correctional Institute, where she had been housed since April 8, to a cottage on the grounds of the prison in Niantic is an interim step.

Her living conditions also seem to have been improved.

But the move to the cottage can be considered positive only if "interim" means a very short time.

Jane Doe can't be allowed to languish at York, either in a cell or a cottage, while lawyers, bureaucrats, politicians and advocates continue to argue.

Get Jane out of prison now.


Posted by planetransgender at 5:57 PM No comments: Links to this post

Transgender woman Indiana (Indi) Kelly Edwards has asked that a group of Australian drag queens change "Tranny Bingo" to a name that is not a defamatory slur. It seems like a reasonable enough request but one we know is difficult to accomplish. Planetransgender has been "taking on tranny" for years. Even though there has never been a moment when we could declare victory, in the process we have changed the way we and others think about the trans community. We have gained respect not just from the gay community but from society as a whole in the UK and the USA. A fact not missed by the drag and gay community in Australia.

The conflagration came to notice when the Herald Sun published a 'news' article "Sydney drag queens fight trans-gender warrior Indiana Kelly Edwards over right to use the word tranny". It wasn't a news article in the sense that it only projected one side of the story spun in a way that made transgender people's objections insignificant and inconsequential.


“In Australia there are few negative connotations attached to the word ‘tranny’, unlike in America,” he says.
“I think the campaign is being waged by people who are trying to involve American activists in an Australian debate.
“We have events in the gay community called Poof Doof and Fag Tag."

Mr. Tration does not get to nationalize slurs, not in this day and age. He acknowledged that America has come to understand that 'tranny' is defamation but he failed to note the same is true for the UK . Australian gay men have the same obligation to do no harm the same as the rest of the world's gay population.

And apparently a Poof Doof is a gay dance rave and Fag Tag is when a group of gay men take over a normally hetero venue for a night, which has absolutly nothing to do with trans defamation.


Claims the campaign is being led by a “small group of people who are making a lot of noise. But if you do the research there’s not a lot of support behind it”.

He says the activists argue that when drag queens remove their costumes, they can easily blend into society.

“Well, guess what, when we remove our wigs we become gay boys who have faced homophobia our whole lives,” insists Penny Tration.


Number one, it is a small group of people making noise. In fact we are less than 1% of the worlds population and to the best of my estimate only a 10th of those individuals are in a place or have a will to confront the seemingly endless onslaught by gay and straight people.

Yes the violence and suicides experienced by transgender people is that extreme so our voice might sound weak to you Tration.

But we are so sick of gay people cavalierly using defamation that offends us we're forced to speak up. It's not a popularity contest where the one with most votes wins and its not a freedom of speech issue as the tranny bingo ">petition would lead one to believe. Why oh why don't you call it "Faggot bingo"? Why? Because it wouldn't be amusing for you personally Mr Tration.  You self identify as a gay cisgender male and it wouldn't be 'sexy' for you to use defamation that you hear before someone beats the shit out of you.We will not accept this.

As far as taking off your wigs goes. Using the homophobia that you have encountered does not give you license to use defamation that hurts another minority. Not all gay Australian men are endeared by as 'faggot'


Indi appeared on the Australian morning show Tenlive Tuesday. After the hosts warmly welcomed Penny Tration to the show and talked about how fun tranny bingo is they looked over to Indi as if to say, well I guess we have to hear from her for it to be story and allowed her a moment to speak.

Indi told planetransgender ""firstly for the record I never claimed it (the moniker 'transgender warrior'). [It] was imposed on my by the Herald Sun who interviewed Verushka Darling."

Saying that she felt she was up against a seasoned performer she wanted to explain that "Privilege in context of this interview I was actually referring to cis gender privilege. it seems we are being dictated to by people who have cis gendered privilege on what is or isn't offensive or harmful to us. As key stake holders I feel we should at the very least have a say in this. What I am hearing from gay men and /or the drag community is that we don't and we need to shut up. IMO its not their call to make. I would in this case and all things considered err on the side of safety."

The Charing Cross is delighting in defaming transgender people. Here's what you can do about it. Write a review on the facebook pages of the establishments that are hosting 'tranny bingo' and ask your friends not to patronize them.

Posted by planetransgender at 12:41 PM No comments: Links to this post 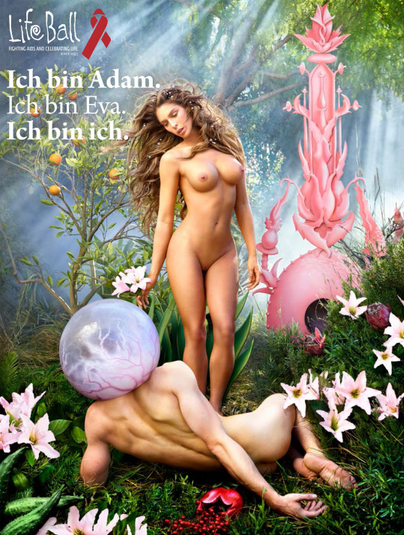 There's a few different ways a person could react to artist David LaChapelle's posters of Carmen Carrera. According to LaChapelle, the posters are inspired by the Life Ball’s theme, “’The Garden of Earthly Delights’ and Hieronymus Bosch’s utopia of a diverse society, living together passionately and peacefully, as if the Fall of Man had never happened and people had never been expelled from Paradise.”

“Gender lines are blurred and every person is unique in how they see themselves,” LaChapelle explained in a statement. “For me the body is more than something to be looked at as an object of sexual gratification. The body is a beautiful housing for the soul that we are celebrating in this picture.”

Carrera points out that the artwork’s statement, “I’m Adam, I’m Eve, I’m Me” has a special resonance for her. “Your gender should not matter in your heart or in the way you express your personality... My message is: beauty has no gender. At the end of the day beauty is beauty.”

The Life Ball is an annual HIV/AIDS charity event that this year will take place on May 31 in Vienna, Austria. It seeks to showcase the variety of ways and expressions individuals are using to fight HIV/AIDs.

When trans people look at those images, we invariably feel shock that a trans woman would allow her body to be put on display in a way which plays to haters memes. Especially so soon after she and Laverne Cox tore Catie Couric a new one for having the unmitigated gall to ask if they had sexual reassignment surgery.

Imagine Cuoric is feeling a little but put apon right about now. And how will this affect media coverage in the future?

In any case it  sends a really mixed message to the media erasing the advocacy they had accomplished just months before. For most of us in the real world it makes a world of difference how people perceive us, so in that sense her posters did us no favors.

The Daily Mail wasted no time taking the conversation to the lowest denominator, and if you read the comments, its clear they reached their intended audience. But in the end its a waste of time trying to appease the haters, but giving them ammunition to take shots at us?

So what is the "Life Ball"? I  don't think I've heard of it before and if I had I didn't pay it any mind and probably wouldn't have now, were it not for Carrera's posters. It looks like a huge gay party fundraiser, HRC style but lets give it a chance.  I downloaded to Scribe the sites info........

Posted by planetransgender at 7:08 AM No comments: Links to this post