MDPETITION.COM Claims they have 1/3 of the signatures needed for referendum drive 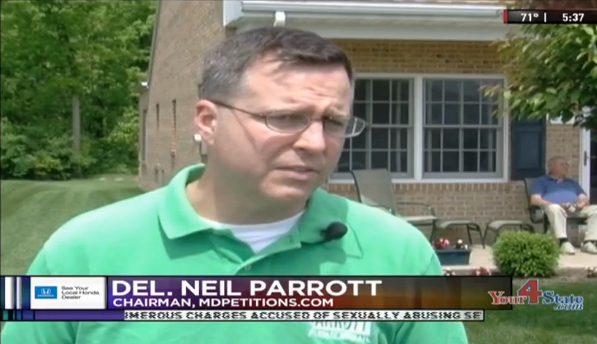 If this is true (and who knows?) the haters will have to collect 13,500 more signatures by May 31st. That's not a impossible if they focus on people like the elderly tea putzer like the one in this video.

But if they ask informed people like the young man, (ouch whats with the 'T' word?) they don't stand a chance.

Delegate Neil Parrott, the chairman of mdpetitions.com, is hard at work going door-to-door trying to get signatures for a petition drive.

"We have a May deadline to get signatures, I've got the signatures pages right here, for the 'Bathroom Bill,'" said Parrott, (R) - Washington County.

The Maryland General Assembly passed a bill this session the governor signed into law last week making it illegal to discriminate against transgender people in employment, housing, credit, and public accommodations.

Opponents refer to the law as the "Bathroom Bill" over fears of what they say could happen in women's restrooms.

"It allows men, if there's a guy who's dressed just like me, he could walk into a restaurant and use the women's restroom as long as he sincerely believes in his heart he's a woman. That's what the bill language says. If anyone would challenge him and say, 'You can't go in there,' they could be successfully sued,'" Parrott said.

How much of what Delegate Neil Parrott says is truth? I don't want to get sued for slander so lets just say nothing, not one thing, nada. For folks on the fence you can read "Debunking MDPetition.com Neil Parrott falsehoods for opposing the Fairness for all Marylanders Act" to clear the air.


Posted by planetransgender at 7:24 PM No comments:

ARCADE FIRE Video "WE EXIST" is a real drag. 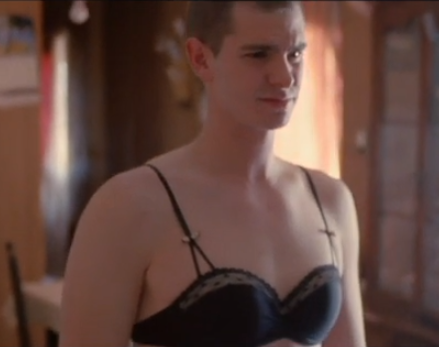 We? Do you have a mouse in your pocket?

I had a whole lot of emotions surging through me as I watched this video for the first time. I'm going to be blunt. It looked like a dude, Andrew Garfield. of spiderman fame, decided to put on a really bad wig and a skimpy top and to go the one place where she's knew she'd get beat up, a redneck country bar on dollar long neck night.

Then she struts in like a man, shoulders out, all macho. I mean what's up with all that?

MTV's article proclaimed, "We Exist" the new LGBT "Anthem," but sometimes when we write our thoughts are betrayed technology. Such is the case with MTV's article with the HTML link "http://www.mtv.com/news/1825966/andrew-garfield-drag-gay-acceptance-dancing-we-exist-arcade-fire-video/ " conflating transsexualism with sexual orientation.

OK so it's a Gay/Drag anthem. I can live with that. But using a hot cisgender actor for sensationalistic reasons instead of a of a trans woman? PQ says its because Arcade Fire has a Messiah complex. But wait this isn't The Dallas Buyers Club, there was a trans woman who coached him.and Lady J didn't wait months to tell us.

Of course, I am speaking as someone who made that first step a decade ago. Have I forgotten how traumatic that was or how ridiculous I looked in my really bad wigs and makeup the first days? I guess I have. Well, maybe that mouse in your pocket could be me. But WHAT was Arcades Fire's intended message?

According to Billboard Arcade Fire frontman Win Butler said "We Exist" is a song about a son trying to tell his father that he's gay. At Coachella last month, during the concert as a pretext to the video being recorded, Butler urged the crowd to get behind the same-sex marriage movement in a more demonstrative way saying "The right to marry anyone you want is a human rights issue."?

But couldn't we just stay with MTV's first take on this and call it a drag gay same sex marriage anthem without seeming overly sensitive?


Posted by planetransgender at 8:11 AM No comments: