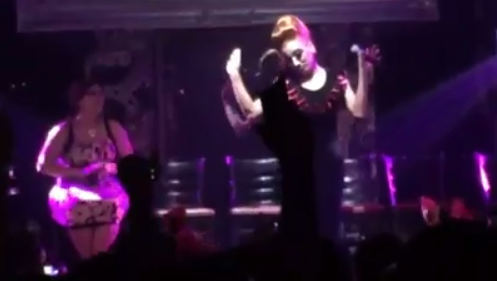 Del Rio raised his arms as the audience clearly recognized he went to far.

What could have caused Del Rio to attack her so viciously? Carmen Carrera was a contestant on Season 3 of Rupauls Drag race and afterwards has enjoyed success as a transgender model. Is that the only reason? No it is not. Carman has gently been trying to ask that  Rupaul stop using transgender defamation.

Bianca Del Rio sees that as a betrayal of gaydom. He sees Carmen as a turncoat, but more than that. Del Rio now sees Carrera as a target, less than human to despise and denigrate. Del Rio sees Camen as transgender.

I posted Del Rio's comments unedited because of how his words actualize the hatred being spewed by RuPaul and his gay fans toward transgender people. What he said:

Post by Rupaul's Drag Race Family.
Carmen Carrera comes out as transgender on "What would you do".

Once again I have to ask. Does LOGO want to be branded with this hate? And oh yeah, where's GLAAD?