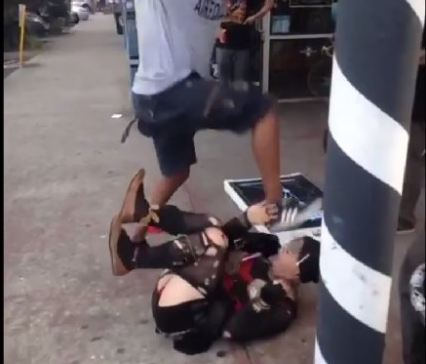 Appearing in the higly eddited video a transgender woman is seen responding to taunts from a crowd outside a Five Points skate board store as reported by the GA Voice.

Video has surfaced online of a transgender woman being brutally assaulted in Little Five Points. The attack occurred in front of stratosphere skateboards. The Vine video was posted Tuesday and started circulating on Twitter late Wednesday.

A Vine user with the username TriAngle SquarE posted a series of Vines showing a trans woman in a verbal altercation with several people. The last video posted showed an unidentified man throwing the woman to the ground and then stomping on her head. You can view all of the Vines spliced together below into one video, but be advised that it is violent and includes explicit language.

According to GA Voice the police have no knowledge of this attack and have been unable to verify that the unnamed victim was admitted to a hospital. The the police are investigating even thougb the attack remains unreported.

TriAngle SquarE poated this on Vine Repeated call to Stratosphere Skateboards have gone unanswered. If you have information about this please contact Mini Precincts & Investigation Unit Investigations Unit (404) 373-5331.
Posted by planetransgender at 9:46 AM No comments:


It takes courage to stand up to transphobia but its extraordinary when that happens in the bible belt. Atherton Kentucky principal Dr. Thomas Aberli told the assembly that he was standing by his policy allowing students access to public accommodations.

Dr.Aberli addressed the alliance defending religious freedom.org letter appealing the policy saying that he's taking personnel responsibility for his decision to allow transgender students to use the bathroom that matches their gender expression

Source Courier Journal A group of parents and community members have appealed Atherton High School's new policy that allows students to use the restroom and locker room of their sexual identity.

Atherton's site-based decision-making council will meet at 5 p.m. Tuesday to discuss the appeal, which was submitted in writing by Clinton Elliott, a Louisville attorney with the Christian-based legal group Alliance Defending Freedom.

Posted by planetransgender at 9:24 AM No comments:

Suspect surrenders to police for the murder of Transwoman Tiffany Edwards 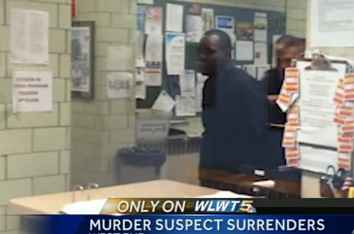 Quamar Edwards wanted for the murder of Transwoman Tiffany Edwards, turns himself in to police. The suspect's uncle told WLWT:


"MY NEPHEW AIN'T ON NO HATE STUFF. DON'T MAKE IT KIND OF SEEN LIKE A MONSTER OR A VILLAIN." QUAMAR'S UNCLE SAYS TIFFANY ASKED HIS NEFF KNEW FOR A RIDE AND SOMEHOW THINGS ESCALATED FROM THERE.

"APPARENTLY HE FOUND OUT THE BOY WAS GAY BECAUSE HE TRIED TO HIT ON HIM AND ALL OTHER KIND OF STUFF. AND I TOLD YOU MY NEPHEW GOT AN ATTITUDE ABOUT THAT NOW. I DON'T KNOW WHAT HAPPENED AFTER THAT, BUT THIS HAD NOTHING TO DO WITH BECAUSE THE GUY WAS GAY."

WLWT and most Ohio media outlets identifies Tiffany as a man using her birth name. WLWT s does its best to present a man who committed a transpanic murder as the victim. If the murder did go down like how his uncle says it did, he was motivated by transpanic.. California's Assembly just voted for legislation outlawing that defense. AB-2501 is expected to pass the Senate and become law this year.

The investigation remains ongoing, and anyone with information about the shooting is asked to call the Cincinnati Police Department Criminal Investigation Section at (513) 352-3042.
Posted by planetransgender at 8:18 AM No comments: