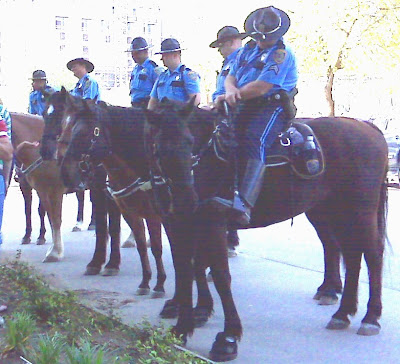 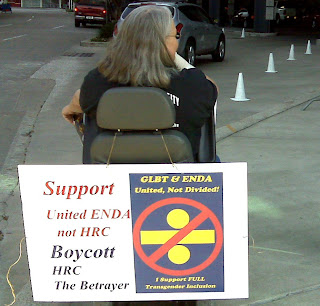 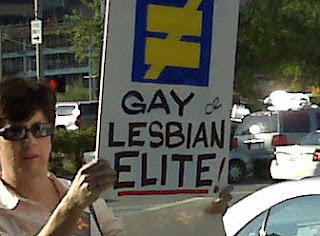 Armed with cardboard signs and tactical wheel chairs the invading army of Trans~el~vainia attacked the bastion of the Homosexual Rights Corporation, Black tieville.
The defenders of the land of exclusion were well prepared. A wall of iron marked the borders. And with a horse mounted mercenary battalion, a swift bicycle reaction force and a regiment of foot soilders the residents of Black Tieville felt secure. We fought bravely, our little band of t's and the battle pitched. In the height of conflict middle fingers suddenly emerged from the passing BMW's and Lamborghini's.
We were agastat and our feelings were hurt. We were forced to call in our mighty mechanized division to hold the line.
But alas, we were being overwhelmed. Left with no choices our secret weapon was unveiled. A device so mortally feared by the dominion of exclusion that they seek to erect walls of deception so high that none may witness. A beautiful smiling face emerged from the rubble and waste! Ahhhhh haaaaaa!!
The enemy stumbled back in shock and awe!!
The cooperation was not expecting a natural wonder so pure and powerful and was set on it's heels retreating to it's lair inside the mighty walls of Black Tievlle to lick it's wounds and seethe in in anger while staring out, a captive in it's own hate and discontent. You see, although we are just a ragtag alliance, a band of brothers and sisters and intersexed and thirdsexed and questioning and allies we have what the masters of the walls do not possess.
Freedom and peace of mind that comes with knowing in your heart that you are a good and honest soul.
Live long my brethren, we will be called again to the battle soon(November in Dallas)!

Kelli Anne Busey
Queen of drama~ville
Posted by planetransgender at 5:57 PM No comments: