Protesters Among the Gay Tuxedoed Crowd 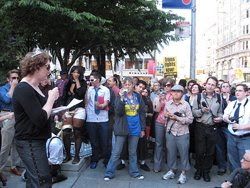 
This is one for the history books,” said Robert Haaland, a longtime San Francisco transgender activist. He couldn’t be more on the money. A coalition of groups, including Pride at Work, And Castro 4 All, and the Harvey Milk LGBT Democratic Club, called a boycott and managed to get not only local politicians, but also the Human Rights Campaign (HRC) dinner’s keynote speaker to cancel at the last moment. In the end, HRC, the national gay group that last Fall dropped transgenders from coverage in the Employment Non-Discrimination Act (ENDA), learned the power of the queer and transgender communities in San Francisco.
Posted by planetransgender at 8:36 PM 1 comment: Links to this post

Queer issues take a global stage at the United Nations 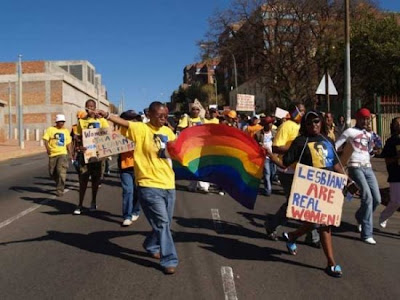 29 July 2008 [MEDIAGLOBAL]: Of the more than 3,000 non-governmental organizations holding consultative status to the United Nations, only a handful address gay, lesbian, bisexual, transgender, and intersex issues. This week saw an incremental but significant step towards change: two groups, COC Netherlands and the State Federation of Lesbians, Gays, Transsexuals and Bisexuals of Spain (FELGTB), gained admittance to the United Nations Economic and Social Council. 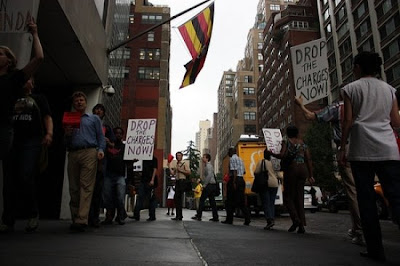 The impact of United Nations policy bears far-reaching implications for lesbian, gay, bisexual, transgender, and intersex individuals everywhere, and the community’s marginalization within the international framework has come under increasing scrutiny. According to South Africa based Gender Dynamix, Africa’s first transgender rights organization, discrimination against individuals who do not conform to conventional gender expression places them at high risk for HIV infection, compounding the impotence of national and global policies that fail to take sexual and gender minorities into account.
Posted by planetransgender at 5:56 PM 1 comment: Links to this post

Jeremy Gilley is an actor turned film maker, who in the late 1990's became preoccupied with questions about the fundamental nature of humanity and the issue of peace. He decided to explore these through the medium of film, and specifically, to create a documentary following his campaign to establish a day of ceasefire and non-violence.

In 1999, Jeremy founded Peace One Day, a non-profit organisation, and in 2001 Peace One Day's efforts were rewarded when the United Nations unanimously adopted the first-ever day of global ceasefire and non-violence on 21 September annually - Peace Day.

In 2007 according to the UN, over 100 million people were active on Peace Day, in 192 countries. There were life-saving initiatives in 14 countries, and over 80 activities in Afghanistan alone where 1.4 million children were vaccinated against polio.

WHAT WILL YOU DO TO MAKE PEACE
ON 21 SEPTEMBER?

Make your commitment now click title for
www.peaceoneday.org
Posted by planetransgender at 1:40 PM No comments: Links to this post