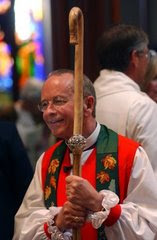 Being a transgender woman of faith I have seen the results of exclusionary language being retained by our Churches on our gay and lesbian saints. It would be inconceivable to me to accept the proffered acceptance of churches towards transgender people and watch as our loved Lesbian and Gay family are left behind to suffer alone.
********
In a article by the Dallas Voice Sept. 18, 2008 John Write Staff Editor interviews Bishop Robinson who believes God loves all God’s children’

"V. Gene Robinson, who became the first openly gay bishop in the Episcopal Church in 2003, will be at the Dallas’ Black Tie Dinner in November to accept the 2008 Elizabeth Birch Award. Robinson sat down with Dallas Voice recently to talk in a telephone interview about his upcoming visit and other issues."

{In this article Bishop Robinson talks about his situation as the only openly gay Bishop in the Anglican Communion and the response of the Anglican church.

Transgender Clergy were in evidence at at the recent Lambreth gathering for possibly the first time.

He also speaks about our vibrant faith community in Dallas and Fort Worth......}

DV: Dallas has what is known as the largest gay church in the world. In the context of what you’re talking about, is that a good thing or a bad thing?

V.G.R.: I certainly would never hold it against someone for leaving a church that is inhospitable and unpastoral in order to find a church home that supports them in their faith journey. So I applaud MCC churches and other churches like the Cathedral of Hope. I applaud them for providing that kind of sanctuary. On the other hand, it makes me very, very sad that all of our churches, which ought to be safe places for all of God’s children, are not living up to what they’re called to be. And so I feel like my mission is to at least try to make the Episcopal Church that kind of safe place for LGBT people all over the church.


{Bishop Robinson it appears is in full contact with the LGBT Community and aware that all is not perfect in the LGBT community.......}

"DV: The chief beneficiary of Black Tie is the Human Rights Campaign, which has been criticized supporting a version of the Employment Nondiscrimination Act that didn’t include gender identity. And I understand there is a protest of the dinner planned this year by a transgender group. Can you sympathize with them, and did that play a role in your decision about whether to accept the invitation?

V.G.R.: Well, first of all, I only learned of this protest very recently. I am intending to write back to the transgender group and say that I do intend to receive the award and speak at the Black Tie Dinner, but that I would also be willing to appear, meet with, participate in an event, whatever, with the transgender community to show my support and to speak on their behalf as a fellow member of the community, the larger LGBT community. It goes back to what I said about half a loaf and a whole loaf. The Human Rights Campaign has an enormous influence in Washington, and they’ve got considerable political savvy, and the fact of the matter is that a full LGBT bill simply would not have passed. And I don’t think we always have to hold out for the full loaf before moving forward. You get what you can accomplish and then continue to work for the rest of it. If I believed that HRC was not supportive of transgender people, if I believed that they were not going to continue to work diligently to get transgender people covered under that bill, then that would be a whole different story, but I’m not of that opinion."

Transgender people of faith applaud Bishop Robinson's willingness to learn of and hold discussion about our connection with faith and the turmoil that has engulfed us by the actions of social organizations that affect us.