What do we want? Equal Rights Now.

The battle cry of the GLBT community began resounding throughout California after the passage of Prop 8. Many in the GLBT community found the Mormons contribution particularly offensive and gathered at Tabernacles to make it known.

Mormons have since have defended there participation and made calls for calm claiming that while the leadership of the Mormon Church did ask for members to donate for the passage of prop.8 technically the Church did not directly contribute monetarily.

Posted by planetransgender at 10:17 PM No comments:

Ten Questions for California United Methodists who voted on Proposition 8

Full Disclosure: I am a 75 year old, African American United Methodist clergyman who was first ordained in 1956. I am straight and have been in a heterosexual marriage for almost 51 years. If I had been a resident of California, I would have voted No on Proposition 8 that defined marriage as being limited to one man and one woman.

1)Was your vote determined by your understanding of Scripture and/or legislation in the United Methodist Book of Discipline?

2)If Proposition 8 had read: "Marriage should be limited to one man and one woman of the same race/ethnicity", would your vote have been the same?

3)Do you believe that in our democracy, numerical majorities have the right to vote to limit the civil rights of numerical minorities?

4)Do you realize that while the U.S. Supreme Court declared in 1954 that the practice of racial "separate but equal" public schools was invalid, the United Methodist Church did not eliminate its "separate but equal" racial Central Jurisdiction until 1968? Does this not suggest that there is a history of the state proclaiming equality before the church? Why did a majority of the voters of California support the "same old, same old"?

5)How are heterosexual marriages in California enriched and enhanced because of the majority vote to deny same gender marriage?

6)Do United Methodists of Color and others who voted to support Proposition 8 realize that the Biblical and Church rationale that some of its initiators professed, was the same rationale that once restricted the rights of people of color? If they now develop a Proposition to limit the civil rights of persons of color, would you support it?

8)I am disappointed as are others because many people of color who were strong supporters of Barack Obama were also supporters of Proposition 8. But, my disappointment is made more moderate because of the history of white majority decisions that limited the rights of people of color. Is it helpful for us as United Methodists to acknowledge the linkages between all of the actions to restrict the civil rights of persons whether because of race/ethnicity, gender or sexual orientation?

9)Do you agree that it would be un-democratic, un-civil, unreasonable and unfaithful to allow the majority vote to support Proposition 8 to make invalid the thousands of same gender marriages that were performed when they were legal? If ever a "grandfather clause" was in order, it is now in order in California

10)The tears of joy that many of us shed in response to the election of Barack Obama were a response to our acknowledgment of the utter foolishness of the attitudes and actions that once made impossible the election of an African American President. When same gender marriage becomes legal in California and the rest of the nation, we will again shed tears as we remember the foolishness of the vote to support Proposition 8. Regardless of how you voted, do you now dare admit how tragic it was to even consider a Proposition 8 in the 21st century?
Posted by planetransgender at 2:29 PM 1 comment: 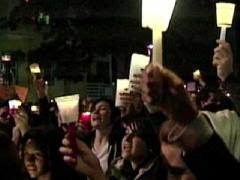 WKSBW Channel 8 : 7 Arrested In L.A.-Area Prop. 8 Protest One protester after dancing on a police car was brutally taken down WKSBW reports high state of tension between opponents and proponents of Prop. 8. Police have riot gear at the ready and even worn in some instances.

Posted by planetransgender at 1:12 PM No comments:

It's one of my habits. I do this all the time. Let's go to Church. This week lets go find a Church of Jesus Christ of Latter Day Saints and pray. I love Church.
Posted by planetransgender at 11:43 AM No comments:

Queers United next door has a very active No on 8 conversation going.
Posted by planetransgender at 10:25 AM 3 comments:

Email ThisBlogThis!Share to TwitterShare to FacebookShare to Pinterest
Labels: Thou Shalt Not Lie: Tell Mormon Church, Vote no on Prop 8 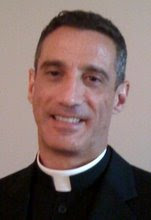 Father Farrow writes from the corner of San Vincente and Santa Monica Blvd. "Thousands of people gathered and marched up to Sunset Blvd. Equal Rights the chants filled the night!"

Father Geoff Farrow a Catholic Priest, who when asked in October to speak in favor of Prop. 8 followed his conscious and spoke against Prop 8. This is a true American patriot, a man of incredible faith who as a straight man stands with us even when his existence is questioned. I am no theologian but I think Jesus would be pretty proud of a soul who is willing to sacrifice all for you and I.

Posted by planetransgender at 7:31 AM No comments:

CA: NO ON Prop. 8 Rally Calls to March on Mormon Temple in Los Angeles Nov. 6th 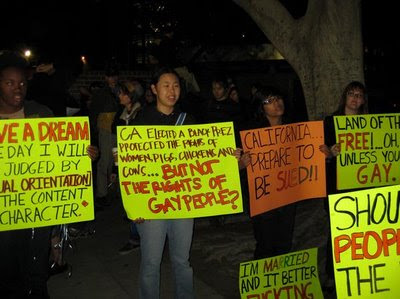 During the Prop 8 debate the Mormon Church contributed monetarily to embed it's views of human rights into California's state constitution. Frustration over a church buying its way into the personal lives of Americaian citizens will be demonstrated at a protest Thursday Nov 2, 2008 at the Mormon Temple 10777 Santa Monica Boulevard in Los Angeles

Lez Get Real's own contributors were at the Prop. 8 Protest Rally held in Santa Monica, CA earlier tonight.

Streets were closed in the area to accommodate the gathering. Here is what happened at that rally, as reported to me via text message from p.Johanna:

"There was a reverend speaking and also another woman, who said this is a human rights issue. The crowd was really hyped. They said we need to stay angry! We need to keep going against Prop. 8 and towards civil rights and equality in the U.S. The crowd cheered in unison 'Yes we can! Yes we can!' They said we shouldn't be violent, but that we should work together to not be at the back of the bus anymore. The crowd yelled 'Equal rights! Equal rights! News channels began to arrive and it seemed like they didn't know this event was happening. A call was issued to march on the Mormon Temple at 10777 Santa Monica Boulevard in Los Angeles at 2pm tomorrow November 6th. Bring your signs and video cameras.

Jerry Brown the State Attorney spoke saying that the marriages performed between June and yesterday are still valid. They are fighting for us and it's a legal mess. They are working around the clock on this. Jerry Brown says that we need to walk together, to walk in solidarity. The crowd yelled together 'Yes we can! Yes we can!'.

Javier Angulo called for a Chicano clap. The crowd yelled 'Si se puede! Si se puede!'. A helicopter flew overhead, and the crowd cheered at it. Javier Angulo quotes Martin Luther King Jr. saying that he had a dream and Obama made part of that dream come true. He says that now our fundamental rights have been infringed upon, but hold onto hope - all the votes have not been counted. Regardless, he said to take pride in achieving social justice. He said that the Latino community is often overlooked, and that Latinos value social justice. He says we have an ally. At that point everyone, even other nationalities chanted 'Si se puede! Si se puede!'. The helicopter shined its light on the crowd. He said they were shining the light on discrimination.

At that point, the woman began to speak again and said that bigotry is not only here, but in Arkansas, Arizona and Florida, but said that years to come the people who voted Yes on Prop 8 and in the other States will be ashamed of themselves. The crowd cheered 'Shame! Shame!'. She said that we are on the right side of history. Now, we're mad. And when we get mad, we work harder and we work smarter. The opposition will wish they didn't mess with us. At that, the crowd went crazy. I would often hear, 'TAX THEM! TAX THEM!'

She continued by saying that if we look at Prop. 22 we lost by a higher margin. This time we were within 5 points. That is enormous progress. The crowd yelled 'Not enough! Not enough!'. They were very angry! She went on to say that we make a promise to our opponents that we will gain our rights back, and we will crush discrimination. She said don't lose heart; use this as a push; don't give up... vow to continue the fight. She said to talk to everyone you know and tell them why the vote was wrong and how it was wrong from the start. Tell them how the majority was tyrannical to the minority, she continued. Tomorrow we will march on the Mormon Temple. The crowd cheered. The emphasis seems to be against the Mormons, and to fight against them. The crowd cheered in unison 'Equal rights! Equal rights!' There was a sign next to me that said 'You can't amend love.'

At that point she told us the rally was over. She said that tonight do not take it to the streets. We aren't taking it to our streets, she continued, tomorrow we take it to theirs."

***Please Re-Post This Message and Stay Tuned for More Info***


Posted by planetransgender at 4:02 AM No comments: