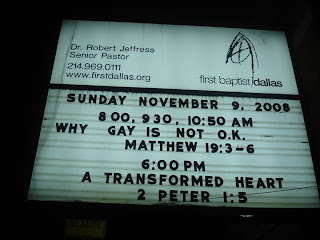 Rev. Jeffress is known for his failed effort to ban books books from the Wichita Falls TX library which resulted in the public donating hundreds of copies to replace those that Rev. Jeffress refused to return.

Many who people have been upset by the Mormons November 4th interference in California's civil rights efforts are equally disturbed to learn that right here in our beloved Texas religious demagogues are seeding homophobia and bigotry.

A street demonstration is scheduled across the street from the church entrance on San Jacinto Street at 10 a.m. Sunday. Those attending are encouraged to bring signs.

For more information about the protest, e-mail Fulcher at samblade8@yahoo.com. 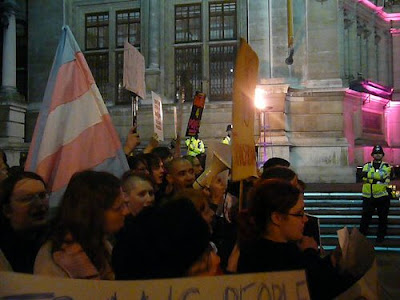 The Awards ceremony in which unapoligetic transphobic Julie Bindel was awarded the writer of the year award from the UK's inappropriately named "Stonewall" group was protested by a large group of mainly young and disenfranchised Transgender, Queer and Allies.

London as reported by Loz Flowers

"Stonewall, despite naming itself after an event in which trannies took part, has never made any bones about being an organisation that does not represent transsexual people. However, for it's 2008 awards it decided to accept a nomination for best journalist for Julie Bindel, a writer with a history of transphobic opinions and writing.

So a group of about 150 pissed-off transsexual people and their allies held a fun and trouble-free protest outside of the Stonewall Awards at the Victoria and Albert Museum on the evening of the 6th of November 2008 to remind them of what they seemed keen to forget or ignore."
Posted by planetransgender at 6:41 AM 3 comments: