Fish Out of Water

Fish Out of Water - "Every thing you have ever heard about homosexuality and the Bible is going to be turned inside Out!"

Fish Out of Water Trailer part 1

Fish Out of Water Trailer part 2

Email ThisBlogThis!Share to TwitterShare to FacebookShare to Pinterest
Labels: Fish Out of Water, Ky Dickens 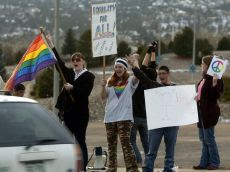 According to the protesters the shared experience of transphobia in school can be mainly attributed to a ignorant faculty who's binary conception of gender is reflected and amplified in the student bodies transphobic interactions.

When a person's gender identity is stifled by a unknowledgeable (ignorant) school faculty eventually the condition will become intolerable for the youth and can lead to the loss of that person to society.

When I attended a medical school I was humiliated by my instructors. Despite my best efforts before the semester began to introduce myself and subsequent strenuous objections I was constantly addressed with the wrong gender. I was allowed to use the faculties one stall woman's restroom, but this only increased my isolation and disenfranchisement. While in the halls the whispered degrading comments, laughter and finger pointing became increasingly frequent and blatant as students mimicked teachers unveiled bigotry making me extremely self conscious and eventually fearful for my very safety. Granted I was very early in transition and my appearance was not polished but the feeling of failure after escaping this intolerable situation was nearly unbearable. It was after all, my only life experience to that point.

Since then I have been successful in obtaining a physical appearance and mental state which nicely matches my gender and I am gainfully employed. My life has become meaningful and my passion for living intensely rewarding.

If we value all youth we must honor that obligation. All schools must work to become educated, understanding of, and sensitive to gender variant youth. It is a teachers obligation to afford equal opportunity to all not just the ones that fit effortlessly and conveniently in line with patriarchal preconceptions.