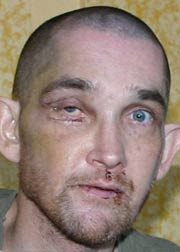 Unified Community Against Gay Hate Crimes(UCAGHC) a Dallas TX group formed in response to the brutal attack on local artist Jimmy Lee Dean has announced the trial date and asked for the LGBT community to show support by attending a rally from 10am to 12pm on January 12, 2009 in front of the Frank Crowley Bldg 133 N. Industrial Blvd. Dallas TX 75207

According to Activist Michael Robinson, key witness and founder of UCAGHC,
(The) "Jimmy Lee Dean case has the opportunity to change or add new amendments to the statute that governs hate crimes cases in Texas. I am asking the GLBT community to stand up together on this very important issue that concerns us ALL. There is a group of people out there that would like to see us all dead. We need to change how hate crimes cases are filed when they go to a grand jury for review so that the D.A.'s offices can indict these cases."