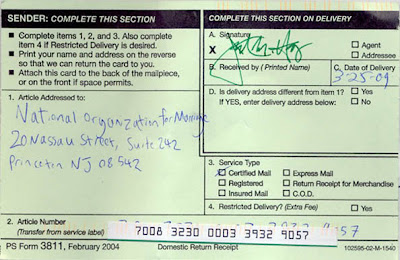 Picture courtesy of Latter Day Chino The as yet unanswered notice to reveal the NOM funders as required by law.

"SACRAMENTO In its continuing efforts to protect the identity of those who bankrolled the campaign to pass Proposition 8, lawyers for The National Organization for Marriage have issued a subpoena for one of the leaders behind the opposition, Californians Against Hate founder Fred Karger, who led boycotts and created websites outing top contributors."
"The subpoena compels Karger to produce the group's financial records and all communications and documentation regarding affiliated websites and the dissemination of donor information. It also directs him to appear for a deposition on October 13th."
"This is harassment and they are trying to silence me," said Karger, who points out that he's not a party to the case. "I'm a citizen activist, and my organization is just me, funded entirely by myself versus the power of a group who has millions and millions of dollars behind it."

"According to a press release sent a few minutes ago by Californians Against Hate, the group’s founder, Fred Karger, has been hit with a subpoena ordering him to produce the organization’s financial records and correspondence and to appear for a 13 October deposition. Clearly Karger’s complaints, filed in California and Maine, have the National Organization for Marriage’s collective knickers in a knot. This is, obviously, nothing more than a blatant attempt by NOM’s Maggie Gallagher to throw her considerable weight behind a shameless legal maneuver intended to suppress her opposition and conceal the sources of NOM’s substantial and mysterious funding."
Posted by planetransgender at 4:19 PM