Last Saturday, nearly 400 activists and leaders gathered in Los Angeles at the Equality Summit to strategize our next steps to win marriage back in California.

Over the next two weeks we will ask you to join us in taking some of those next steps in a series of actions leading up the Love and Marriage Rally at the Capitol on February 16 and Equality California’s massive Lobby Day effort in Sacramento to pass resolutions in support of invalidating Prop 8 on Tuesday, February 17. Each of the five action emails we send will have two steps that you can take to help win back marriage.

Today, I’m asking you to take the first of those actions by joining the Tell 3 campaign. That is tell three people in your life about what marriage means to you.

Choose someone you know who might not be completely supportive. Tell Three is about engaging the people who we need to educate about the freedom to marry.

For helpful and easy-to-use resources, visit tell-three.org and letcaliforniaring.org. Find out who to talk to and get tips on how to start a conversation. Send an email, or connect on Facebook and MySpace.

EQCA teamed up with Join the Impact, American Civil Liberties Union, Equality California, the Equality Federation, Freedom to Marry, The National Lesbian and Gay Task Force, the National Center for Lesbian Rights, and Parents, Families, and Friends of Lesbians and Gays to launch this important, user-friendly site.

All the research we have done before and after Prop 8 has shown that it’s not just knowing someone who is lesbian, gay, bisexual or transgender, it’s about making sure they know how important marriage—and nothing less—is to us and those who support us.

Please, take this opportunity to talk to three people you know today. This action could not be more important to gaining a groundswell of support for marriage

Posted by planetransgender at 9:18 PM No comments: 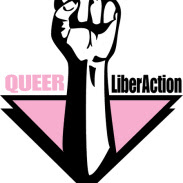 Queer Liberaction's kiss-in is just around the corner. A week before Valentine's Day our Queer love fest is to include women kissing women, men kissing men, free queer hugs, signs, placards and even a Queer kissing booth (which can be seen on the cover of this week's Dallas Voice!

If you haven't met that special someone yet maybe lady luck will smile upon you when you win one of our fabulous prizes while playing our Queer kiss-in games! There will be something for everyone whether it's sporting the wonderful Queer kissing booth, smoochin' your honey or handing out flyers and Queer chocolate kisses to passers by.

So often our voices are silenced because of our sexuality. We are bullied and beaten into the closet. By holding a queer kiss-in we are asserting our right in a very celebratory and fun way to unabashedly love someone of the same gender.
Please join us at Buli (3908 Cedar Springs) this Wednesday at 6:00 PM to help hand out flyers.

QUEER LIBERACTION
Posted by planetransgender at 9:11 PM No comments: