Source Associated Press US to sign UN gay rights declaration! The US condemned worldwide by human rights organizations for the Bush administrations refusal to sign the United Nations declaration decriminalising homosexuality will join with the western world by signing the UN document, sources now say.

Still refusing to sign the UN document are Islamic countries, Russia, China and the Vatican.

Posted by planetransgender at 3:25 AM 2 comments: 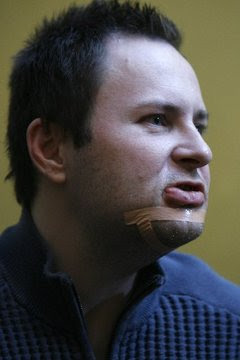 Pictured Daniel Caldwell who's jaw was broken during the attack. According to security guards police drove away despite being flagged down by witness's after a group of twenty people beat the couple. Forty five minutes after Cadwell was transported by ambulance the police finally appeared at the crime scene according to Caldwell's partner, Joshua Kehoe.

The police, reluctant to label attacks 'hate crimes' are looking at DOT video's from the area to help make a determination if the attack was bias motivated. According to the victims, the assailants yelled hate slurs that defame homosexual's while hitting and kicking the couple.

Steven Goldstein, chairman of Garden State Equality said his group is looking into the attack.
"Two people have the living daylights beaten out of them, while they are called a (epithet)," he said. "If that's not a hate crime, then I don't know what it is."