Defense: Colo. slaying because of deception

Found on 365Gay is AP article "Defense: Colo. slaying because of deception"

This article gives us a description of the transpanic tactic being deployed by Andrade's Defense team as they try to lessen the burden of guilt.

"Andrade’s attorney, Bradley Martin, said the case is about Zapata’s deception and his client’s reaction to that deception."

“This girl that he had just spent the last day with, was in fact a man, and Allen snapped,” Martin declared in opening statements."

"Prosecutor Brandi Nieto told jurors that Andrade and Zapata communicated nearly 700 times via text message, cell phone and computer between July 12 and July 16 as Zapata was apparently searching for a roommate. She said Andrade did not make a snap decision but rather decided to kill Zapata after the pair spent hours in Zapata’s tiny one-bedroom apartment."

"Andrade could have walked away once he learned Zapata was biologically male, Nieto said."

Please read on but be forewarned, accounts of lieing, deception and lowdown dirt crawling cowards spiting up hateful misconceptions are vividly described which has been know to precipitate crying and/or rage.

Posted by planetransgender at 3:32 PM No comments: Links to this post

Call for an independent investigation into torture : Amnesty International USA 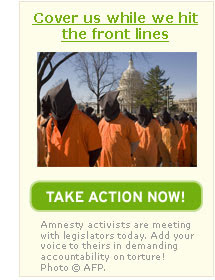 In a pivotal moment in our call for accountability, yesterday the Obama administration finally released the four infamous memos crafted to provide legal cover for the U.S. torture program.You and I know there is no legal form of torture. But Obama wants us to believe that "this is a time for reflection, not retribution."We've done plenty of reflecting, and the information in the memos only confirms what we've known all along. Torture is illegal under both domestic and international law and no set of legal memos can change that.Within hours of their release, the memos fueled new speculation that there is just too much out there now for Congress to ignore calls for accountability.

Incredibly, our lobby week is wrapping up today, giving us an amazing opportunity to push Congress on accountability, when they're most receptive to our calls, both in person and online. Send a letter now to Congress calling for a full and independent investigation.Before today, major editorial boards from the Boston Globe, Salt Lake City Tribune, and Philadelphia Inquirer threw their hat into the ring, calling for accountability.While we may have convinced editorial boards, it's Congress that has the power to setup independent investigations. This is the last day of our lobby week. While Amnesty members finish up their meetings, let's hit Congress from both on and offline.Send an email to your elected officials and tell them that you want to know the truth about torture. Once members of Congress realize they can't turn down the buzz about torture in their own districts, they'll have to confront the issue in Washington.The Obama administration has truly taken some important steps to correct past mistakes. Just a week ago, the CIA announced that it is no longer operating any of the secret overseas prisons used to detain terror suspects. While correcting some of these bigger problems certainly puts us on the right path, it doesn't tell us how we veered so far off in the wrong direction.By this time, anyone who isn't the slightest bit curious about how we became a nation that tortures needs a wake-up call. And we're just the group to give it to them!Thanks for standing with us,

Njambi Good
Director,
Counter Terror with Justice Campaign
Posted by planetransgender at 3:12 PM No comments: Links to this post

Too often, police drug raids in low-income communities across the county sweep up innocent people. Once in the system, it can become nearly impossible for these folks to prove their innocence. They lose their freedom; their families are broken; and the true story is rarely told.

American Violet is a new award-winning film opening in your area today that can help shine a light on the problem. By going to see the movie, you can help it get more exposure--it will run longer in theaters if it does well at first.

You can view the trailer and find your local theater, here

If you're able to see the film, please let us know what you thought by emailing us at violet@colorofchange.org.

American Violet tells the amazing story of a young, single mother swept up in an unjust, out-of-control drug raid that targets the Black community in a small town in Texas. The film is based on true events and it examines how our country's drug laws and enforcement practices target African-Americans, and how the justice system uses threats and intimidation to steer people towards guilty pleas, regardless of their innocence or the evidence against them.

The film is inspired by the real life story of Regina Kelly, an African-American, single mother of four girls who was arrested in 2000 in a military-style drug raid. The raid resulted in the arrest of nearly 15% of the town's young Black male population for felony cocaine distribution. Kelly was innocent. Her name, along with the names of many others arrested (nearly all African-American), were given to police by a single, highly unreliable informant with personal reasons to antagonize her. Despite Kelly's innocence, she was urged to plead guilty by her family and even her public defender so that she could return to her children and receive a minimal sentence. A felony conviction, however, would have resulted in the loss of her right to vote and the public assistance programs on which her family depended, not to mention the tainting of her personal reputation and her ability to obtain employment. She chose to maintain her plea of not guilty. American Violet tells the story of her fight for justice.

Please consider supporting this film, and please forward this email to friends and family to spread the word!

Help support our work. ColorOfChange.org is powered by YOU--your energy and dollars. We take no money from lobbyists or corporations and our tiny staff ensures your contributions go a long way. You can contribute here:

You can contribute here

Posted by planetransgender at 2:43 PM No comments: Links to this post

Today, 8:00AM to 5:00PM-ish MDT, I was in the Weld County, Colorado courtroom where the Angie Zapata Murder. The prosecution dropped a bombshell in the afternoon's opening statements: The Gay, Lesbian, Bisexual, And Transgender Community Center Of Colorado -- in an understated way -- states the courtroom revelation:
In opening statements, the prosecution said they will present evidence that shows that Andrade knew that Angie was transgender long before he killed her.
Prosecuting attorneys said in the days leading up to the two meeting in person, they had exchanged nearly 700 communications.
After meeting, the two went to a traffic court hearing in Greeley in which Angie was identified in court by her previous male name and by male pronouns.
The defense team contends Andrade did not learn of Angie's transgender status until moments before he killed her.
What came out in court, per Deputy District Attorney Brandi Lynn Nieto, was this traffic court trip took place 36-hours before Allen Ray Andrade admittedly killed her.
As the prosecution is describing the timeline, a trans panic or gay panic strategy would, with the evidence that the prosecution has stated in court it will present, be impossible to support. And, that's because a trans panic/gay panic defense is a crime of passion strategy: If, as suggested, Allen Ray Andrade knew Angie was transgender 36-hours before he killed her, then this wasn't a crime of passion.
And, since the defense is using a classic gay panic/trans panic/blame-the-victim strategy -- the defense using the hated language of "deceptive" to describe Angie in their opening statement, and using the language of "supposedly female" to describe Angie in questions posed to witnesses in cross-examination later in the day -- and if the prosecution uses can adequately support their opening statement assertions in their presentation to the jurors, then this alleged 36-hour awareness of her transgender status would destroy the veracity of the defense assertions.
This really is a bombshell dropped by the prosecution team!
Autumn Sandeen :: The Bombshell Dropped In Prosecutor's Opening Statement At The Angie Zapata Hate Crime Murder Trial
Posted by planetransgender at 8:28 AM 2 comments: Links to this post

New media reporter and commentator Autumn Sandeen, (for National Center for Transgender Equality. The interview took place at the 4th Annual California Transgender more...Leadership Summit, held at the University of California, San Diego, on March 27th to 29th, 2009.The discussion covers Transgender Lobby Day (April 28th, 2008 in Washington, D.C.); how Mara is 28th from the top of the list of most "well paid" members of the LGBT related Non-Profit community; the upcoming 3rd Annual Transgender Religious Leaders Summit
Posted by planetransgender at 7:53 AM No comments: Links to this post

"A report by Amnesty International shows Iran, Saudi Arabia and China as being responsible for 90 per cent of all executions in 2008."

"Now, Iran is proposing a new law that could see the death sentence imposed on internet bloggers who post offensive material on the web."

At planetransgender I seek to contact LGBT people in countries that I've had have few visitors from or have a goverment that persecutes LGBT people. Recently I've had some readers from Iran, brave people who refuse to live in shackles. These people's lifes are now in danger.

Abigail authors a wonderful blog tittled "Living my Life". She is a transgender woman, activist and Lawyer who did a brilliant dissertation of the facts as presented currently in the Allen Andrade's murder Trial.

What I found most profound about our meeting is that we may have never met if it were not the for this horrendous act of hatred and our shared passion for justice and wonderment of the beauty of Angie Zapata's life.

Abigail's understandings and peace is a attribute of what accepting and then welcoming transition can be, if you are proficient with, or at least willing to work hard with a oar.

The wild rapids some of us experience are smooth summer ponds for others, but we are all floating in a river of commonality, transgender and cisgender alike.

Andrade's criminal defence depends on hacking apart our shared humanity, and he will fail. In this life his existence depends on a better defense but soon Andrade will kneel in supplication before our Lord, alone and naked in judgement of his soul, for eternity.

Angie's death has illuminated this in neon brilliance.