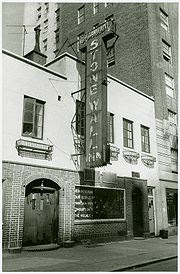 What happened at the Stonewall Riot? What happened on June 28th 1969 that so incensed the transgender, lesbian and gay patrons of this small innocuous tavern to precipitate such violent social disobedience? Why is our 'Stonewall' constantly respectfully referred to worldwide in countries that are experiencing their first LGBT rebellions?

There are people among us in Dallas who were there at Stonewall that balmy night and the Dallas voice's John Wright was there to document this historic meeting some forty years latter .

The Dallas Texas GLBT community is hosting a march and gathering on June 28 2009 to commemorate and perhaps recall the spirit of defiance and sacrifice that bought our current freedoms. It will also be a time to realize civil rights are not given, they are earned. In this moment we all are pilgrims on the front line of civil rights!

I was alive in 1969, but being only 11 and living in rural Ohio, we were just hearing about a fancy new 'fast food' called 'McDonald's' and something called a four lane super highway'!

What I do remember is the highlight of a train trip with a transfer at Grand Central Station in New York NY. We arranged this unsupervised stop so I could fill my suit case with torrid R rated periodicals obstinantly to look at the briefly clad women. But in the back of those tabloids, when no none was looking, I could sneak a peek at people like me! People who were not the same as everyone else. People who said there bodies did not confirm their true selves and changed their sexual organs!!!

Now we have the Internet super highway, a wayback machine of sorts.

In 1969 gay people or 'faggots' as some of my own family and neighbors called me were the targets of unending and merciless harassment and brutality by civilian thugs and the police. As a form of intimidation police and right wing groups rountinely conducted raids of establishments that served LGBT people. Photographers were always at hand to document the stricken faces of our brothers and sisters as they were shackled and lead to paddy wagons. The fallout in 1969 of having your picture eyes downcast in shame was career ending social and marital suicide.

What were the people feeling in 1969? The same as you and I except now we have rightfully earned a communial sense of accomplishment and pride.

Thanks to the brave souls who escaped unharmed and those who stood up to tyranny we can now in our own country be gay proud and loud. We owe nonjudgmental unconditional gratitude and our very freedom to the souls who were at Stonewall tavern.

Jerimaries Transpride speech
Posted by planetransgender at 5:07 AM No comments: Links to this post