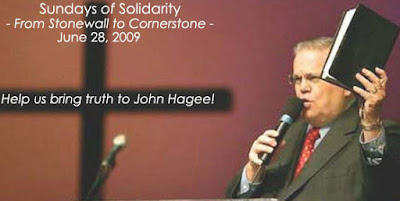 Sundays of Solidarity encourages groups of LGBT and allied people around the country to train themselves in nonviolent direct action and communication, and then attend worship services at a church of their choice - a church that is not welcoming and affirming of openly LGBT members and guests(later actions may also include visits to individuals and institutions other than churches). Participants have the option of wearing a lapel button that reads "gay? fine by me." The lapel button serves as a conversation starter - opening dialogue with people in the church about faith, sexual orientation, and gender identity.
Project Launch:
Sundays of Solidarity will launch on June 28, 2009 - the 40th Anniversary of Stonewall -with a visit to John Hagee and his congregation at Cornerstone Church. An open letter has been mailed to Hagee announcing our visit on that date and expressing our desire to meet with him after the services to discuss how we can help him end his religious campaign against the civil rights and well-being of same- gender families, and lesbian, gay, bisexual, and transgender people.
Mandatory Training:
9:00 am, Beacon Hill Presbyterian Church1101 West Woodlawn, San Antonio, Texas 787201A mandatory training in nonviolence for all participants will be held at 9:00 am at Beacon Hill Presbyterian Church, 1101 West Woodlawn. All participants in this Sundays of Solidarity event are required to attend this one-hour training. Name tags, lapel buttons ($2.00), and a nonviolence pledge card will be distributed at this training. At the conclusion of the training, we will go directly to Cornerstone Church where we will worship peacefully at the 11:00 am service and afterwards either meet with Hagee (if he accepts our invitation) or engage congregants in conversations about faith, sexual orientation, and gender identity.
Why John Hagee and Cornerstone Church?
Since Stonewall 40 years ago, many people around the nation have changed and come out in support of LGBT equality. But, many religious leaders continue to use their substantial power and wealth to fight against equality. The Mormon and Catholic churches spent millions to support Proposition 8 in California. Mega-church pastors use their pulpits to influence the hearts and minds of their congregants, and their television and radio listeners to turn out the vote on issues such as same-sex marriage, hate crimes legislation, employment nondiscrimination, adoption, and foster-parenting. With powerful political connections, they form partnerships with state and federal legislators that oppose equality for lesbian, gay, bisexual, and transgender people.John Hagee is the founder and senior pastor of Cornerstone Church in San Antonio, Texas; a non-denominational charismatic church with more than 19,000 active members. He is the chief executive officer of Global Evangelism Television (GETV), and “John Hagee Ministries,” which telecasts his national radio and television ministry carried in the United States on 160 TV stations, 50 radio stations, and eight networks, including The Inspiration Network (INSP) and Trinity Broadcasting Network (TBN). He is seen and heard weekly in 99 million homes and is seen in Canada, Africa, Europe, Australia, New Zealand, and in most Third World nations.Hagee is founder and National Chairman of the Christian-Zionist organization Christians United for Israel, incorporated in 2006. He has incurred controversy for his comments on Nazism, Catholicism, Islam, Jews, homosexuality, and Hurricane Katrina - which he blamed on lesbian, gay, bisexual, and transgender people.
To see Hagee’s views on marriage equality, go tohttp://www.youtube.com/watch?v=Y43CkCzyPq0and watch how is followers applaud at the 1:50 mark.
To see Hagee’s views on inclusivity, go tohttp://www.youtube.com/watch?v=CVGceWARCXM&feature=related
and to hear him blame gays for Hurricane Katrina go tohttp://www.youtube.com/watch?v=oDI7pt9KGs4&feature=related
There are now 926 known hate groups in this country – a staggering new record - and the teachings of fundamentalist leaders like John Hagee lead directly to the suffering of LGBT people, who are misunderstood, discriminated against, and subjected to ridicule and acts of violence.We must build solidarity with those who support equality for all people. Yet nonviolence also calls us to bring the truth to those who oppose, defile, and even hate us. Hagee is a victim of misinformation, as so many others have been, and we must take our message of hope and love directly to him and his congregation.On Sunday, June 28, 2009, we must peacefully demand that he recognize the separation of church and state, and end his campaign against the rights and well-being of LGBT people and same-gender couples who simply want to marry, raise their children, and live in their communities without fear.Join us 9:00 am on June 28, 2009, at Beacon Hill Presbyterian Church1101 West Woodlawn, San Antonio Texas 787201for the required training in nonviolence before our visit to Cornerstone Church at 11:00 am.
Posted by planetransgender at 9:21 AM No comments: Links to this post