Women in Congo - Weapons of War

Gender Advocacy in its purest form. Woman helping Woman to raise themselves above the hell of war. To empower woman. To build lives that make there children proud and strong.
Posted by planetransgender at 5:24 PM 1 comment: 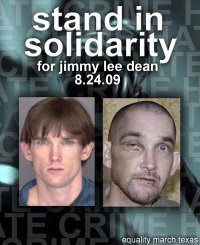 Stand in Solidaidy with our brothers and sisters.

The trial for Bobby Singleton, one of two men who brutally beat and robbed Jimmy Dean in the early morning hours of July 17th, 2008 is set to begin Monday, August 24th, 2009 at 10am.
Jimmy was attacked by two men near his home on Throckmorton Street in Dallas' "Gayborhood." He was beaten in the head with the butt of a gun and repeatedly punched and kicked in the head and face, crushing his jaw and cheekbone. According to witnesses, the two assailants, Jonathan Gunter and Bobby Singleton yelled homophobic and anti gay slurs as they carried out the attack. The suspects told police that they specifically targeted a gay man, because they "believed he would be easier to rob."
Equality March Texas is asking the LGBTQA Community of Dallas to stand with Jimmy by attending the proceedings against Bobby Singleton. We must show Texas that we stand united against hate crimes, but more importantly we must show Jimmy that his community stands united behind him!

UPDATE!
HEY GUYS! This will probably be a 3-4 day trial and we really want people there for Jimmy's testimony, the closing remarks, verdict, and sentencing portions of the trial. Once we get a tentative schedule, we will pass the information on to you guys! Just keep some time cleared on your calendar for the week of the 24th! Any time you can spare, to show support, would be greatly appreciated by Jimmy. I'm sure he's pretty scared to face the man who crushed his face, so seeing supportive peeps from the LGBTQA community will be helpful. GRACIAS!
Posted by planetransgender at 12:44 PM No comments: