By Kelli Busey
Is the Latter Day Saints (LDS) or (Mormons) experiencing a backlash from its misogynistic hypocritical support of Prop 8 or are they the victims of the times?

"In an era of "shifting moral footings," Monson said, "those who attempt to safeguard those footings are often ridiculed, picketed and persecuted."

Like many religions the LDS claim to love the sinner and hate the sin. This is more than don't ask don't tell from a church will allow us membership as long as we do not engage in any same sex relationship. The LDS has proven it believes 'the end justifies the means". The LDS will then misinform, misdirect and attempt to obscure the truths about its participtation in efforts that are clearly in violation of the obtruse laws that so poorly define the church and state.

But unlike many other religions the LDS does not have a clean cut mainstream image that is supported by a worldwide following. The LDS has a history of supporting of child farm camps, tax evasion, polygamy and marriages between fully grown men and minor females.

So now the LDS is feeling the lash-back from pouring millions of dollars into a law that strips the most basic of human dignities, civil marriage from LGBT people. The LDS is experencing the results of a religion that forced it's religious views on the general public. The LDS is feeling the anger not just LGBT people but former members who once would have defended the LDS with unquestioned loyality.

This should be a learning experience for all religions that cross the line of civil rights to impose their religious beliefs. People universally will rebel against oppression. People will leave diocese's en mass. No religion is impervious to this truth.

After all, we are all just human.
Posted by planetransgender at 9:41 PM 2 comments:

Email ThisBlogThis!Share to TwitterShare to FacebookShare to Pinterest
Labels: LDS 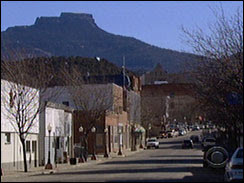 Long regarded as a haven for people consulting and recovering from sexual reassignment survey (SRS) the Trinidad Motor INN was the scene of a brutal rape and attempted homicide according to the Pueblo Chieftain.

According to the victim a man who's advances were turned down in the hotel lobby forced his way into the victims motel room later that evening. The perpetrator allegedly then forced the victim to perform sexual acts all the while yelling hate slurs at her. Afterwards the perpetrator used a wooden coat hanger to sodomize the victim and attempted to murder her first by drowning and failing that, electrocution.

The police have been questioning a person of interest who matched the victims description and are waiting on the crime lab to return the results.

Marci Bowers a surgeon who performs Sexual Reassignment Surgery (SRS) in Trinidad Colorado web site had this posted. "Tuesday, August 04, 2009 - A Note from Dr. Bowers Office and Staff
Some of you may have heard about the alleged rape and assault of a transgender individual in Trinidad in July."

"It's all pretty horrific no matter which way it reads, but it's a complicated situation. This woman was not in town for surgery or to accompany someone else - she came to town with no money, no plan, fairly desperate for surgery - the local homeless services put her up in a hotel and Dr. Bowers scheduled a consult because she came all that way. The fact that the alleged perpetrator has not been arrested at this point indicates that the police are not exactly sure what happened."

"Robin just wants to pass along that, even though she and Janet at the office are pretty upset and shook up about this, that it's not a simple "random act of violence" - that there may have been some history here (the alleged perpetrator may have connected with the victim in Denver). Bottom line - it's been pretty difficult to sort out what actually happened."

"So if you are headed out to Trinidad - please do take standard safety and travel precautions. But do know that this is not something that has happened in town in recent memory, nor is it something likely to recur."

Also on the web

Anyone who has experienced hate violence can report it to the Colorado Anti-Violence Program at 888-557-4441.
Posted by planetransgender at 12:30 PM 1 comment:

Going 'full time' and competing a year long 'real life experience' as required by some surgeons before surgically correcting your genitalia to properly reflect your gender (SRS) is nearly impossible without your driver licence first being corrected to indicate your proper gender.

The proper gender marker allowed me the peace of mind to use the correct restroom which despite my anxiety and preconceptions turned out to be a true blessing.

I changed my name and gender marker in 2007. I did this in Fort Worth which is in Tarrant County. I needed to be a resident of Tarrant county and have a letter from my therapist and a supporting letter from my endocrinologist stating I was on HRT.

I retained a lawyer for my change. I have since successfully walked another MTF threw this painless process.

I have friends in Austin and Houston who have had similar experiences. I have friends who reside outside those counties who have been allowed the name change but denied the gender marker change.

It is imperative to do it right the first time. I have heard people say that second attempts to change there gender marker after a name change meant meeting additional requirements.

What a person was born with between their legs is a sexual organ. You were born with a gender identity that can not be surgically operated on and needs to be the focus during your driver license gender marker change.

If you would like help or if you have questions please feel free to email me and I will try to give you helpful advice and contact names.