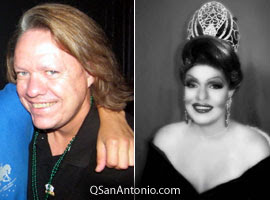 In what appears to be a accidental shooting death, James Lee Whitehead while on his way home after performing as Niki Hunter and was allegedly attacked by these three men.

"Jesse Ramon, Fernando Rodriguez and Michael Martinez were armed with handguns when they assaulted James Lee Whitehead (a.k.a. Niki Hunter) in the early morning hours of August 30. A policeman on the scene accidentally killed Whitehead when he shot at one of the assailants."

James Lee Whitehead was mortally wounded by a bullet fired by Officer William Karman, a one-and-half-year veteran of the San Antonio Police Department.

God bless Officer Karman and family and the San Antonio Police.
Source: Q San Antionio
Posted by planetransgender at 9:08 AM No comments: Links to this post